The iron clad rule of the viruses that identify as "Clintons" is that if their lips are a flappin, you can be certain the lies are a spewin ... wholesale!

When Slick wags his finger and says looking right at the camera that he "Did not have sex with that woman ...", Well, he did! (surprise, surprise)  If he ever tells the truth it is an accident.

Likewise, when Hildebeast screeches on some topic, like "Benghazi was caused by in incendiary internet movie!", you can rest assured, it wasn't, it was terrorism just like everyone knew it was.

We can rely pretty much on the opposite of what the hag says -- no secrets on that server? Well, of course there are -- "mislabeled". Indeed.

So, in my book she just declared Trump to be a great guy with fantastic temperament to be president. Now could she just melt?

We REALLY need a Hildebeast filter that makes sure that we don't have to listen to that harpy screech or the demonic cackle! When I hear her, this is what I see in my mind. 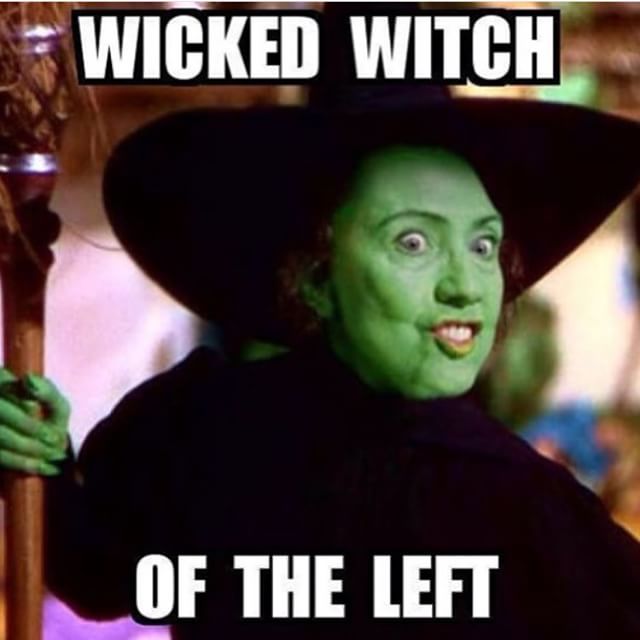 I'm thinking that Trump looks a bit like the Wizard -- a lot of smoke and bluster, but maybe in the end he can find some answers for our sad sorry Lion of a military, Straw-man of an economy and Tin Woodsman of a culture which the ravages of BO have left us with.

Indeed, if we all realized that "We had the power to go back to Kansas all along!" (that making the nation great again isn't about "Witches and Wizards", but rather about us getting back to the real world, putting on our work boots rather than our "Ruby Red Slippers" and GETTING BUSY!

Is this her theme theme music?

I'm guessing that even her Secret Service protection would be glad to see this scene -- it must be hard for them to insure that she never gets wet!