Wrath Of Kahn, Messin With Your Mind 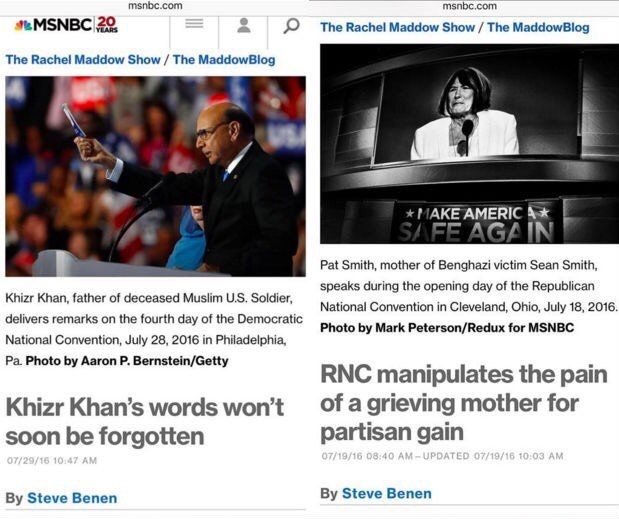 Same author, different convention, you are supposed to THINK DIFFERENTLY!

Any thought or discussion of the brave Americans that died in Benghazi under Hildebeast's watch as Secretary of State is to be ERASED from your feeble mind! Those lives DO NOT MATTER! Any "use" (as in their mother expressing her grief) of those deaths is completely off base. GOT THAT???!!!!

However, an Arab Gold Star Father being put up at the convention for "The Party" (TP-D) is TOTALLY DIFFERENT (TP is doing it, it is GOOD!). Indeed, a WONDERFUL thing, and oh so useful and worthy of many press cycles worth of castigation for Trump and his assumed to be subhuman supporters.

Trump BTW was against the invasion of Iraq and in any case, was not in the government at the time, while Hildebeast voted FOR the invasion -- oh, "But what difference, at this point, does it make?" Mind control isn't about facts.

But it gets deeper:


But until now, it looked like the Khans were just Gold Star parents who the big bad Donald Trump attacked. It turns out, however, in addition to being Gold Star parents, the Khans are financially and legally tied deeply to the industry of Muslim migration–and to the government of Saudi Arabia and to the Clintons themselves.

Unsurprisingly, Republicans are on the list of those attacking Trump. News at 11, corruption has destroyed BOTH PARTIES! The system is rigged through and through and WE ARE THE PATSIES!

They are determined to control your mind and get you to follow the TP narrative!  We are fast approaching the point where "the little people are relieved of the burden of their failed and useless lives" with no more concern than BOistan gives babies in their mothers womb today.

Might Trump merely be a "show candidate" who will purposely hand the election to Hildebeast? Certainly, I'd argue 30% chance at least that is the case. But then why not play it out? Vote for Trump, the establishment (both parties) will make LOTS of attempts to stop him -- all sorts of rigging work like this up to election day, no doubt maybe millions of fraudulent votes, and if that doesn't work, the left is already thinking of usurping the will of the people in the electoral college!

Wow, I've been listening to NPR and they haven't been this concerned about "Gold Star Parents" since Cindy Sheehan! Deaths of soldiers have become as non-interesting since BO as are deficits or poor economic numbers.

At this level of corruption, the media is one big exercise in mind control. It is still barely possible to combat it with greater and greater effort, but the point at which it is ALL pure control creeps closer and closer as life in BOistan continues to descend.