BOistan is a nation that submits tribute to those in power -- Iran, China, Russia ... even Cuba. When BO fell on his father's and grandfather's graves in Kenya, wept because they had not been able to destroy the colonial powers that treated his self-identified people, the Luo, so badly, he promised that this day would come.

I see BO as the most successful leader in modern world history at succeeding at HIS agenda (ending America) ... although the absolute proof will be in what plays out in the next couple decades.

Reagan was able to arrest the long leftward slide of America into economic stagnation and military weakness, but he could not reverse it, so the slide continued and BO was able to strangle the last of the exceptionalism that was America and covert it to the client state of BOistan.

The linked article gives you one example -- China insults the leader of the nation paying them environmental and economic tribute, while flexing their military muscles and those of their ally, North Korea, in opposing THAAD missile defense in S Korea

So, while the world meets for the G20, N Korea accurately fires 3 missiles and China tells S Korea they had best be careful, and then  insults the current leader of BOistan while he signs a deal for us to pay further tribute to China.

In practice, this deal amounts to Americans paying tribute. . . .

For Americans. . .the result will be to increase the regulatory strictures already strangling an economy now growing at a dismal 1%. You, the American consumer, taxpayer, shunted-aside voter, will pay. For China, the cost is far less clear. As the state-controlled China Daily summarizes the arrangements, China has pledged to “peak” carbon emissions by 2030. Obama, by contrast, has promised that America will cut emissions by 28% by 2025, as compared to the year 2005.

In other words. . .America starts paying now. China has 14 years to play around before the deal starts to bite. Plus, under China’s despotic system, coupled with a treaty in which governments are effectively held accountable only by their own citizens, the rulers in Beijing have plenty of room to toss their international commitments right out the window.

They also forced BO to exit from the rear of the plane ... usually called "The Hildebeast Exit".


The other recent tribute was BO breaking open $100 billion plus for Iran so they could sign a deal to get nukes in 10 years or so with zero sanctions. He sent them a $400 million ransom as pallets of cash at night from Switzerland, but they took a couple boats hostage at almost the same time and keep harassing our ships this summer, daring them to shoot. At every opportunity they snub their noses at us and bray a bit more about "The Great Satan".  Perhaps they know something we don't? 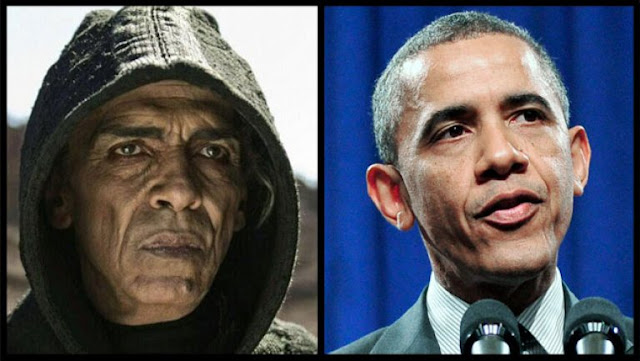 Biblical scholars have known this for a long time ...