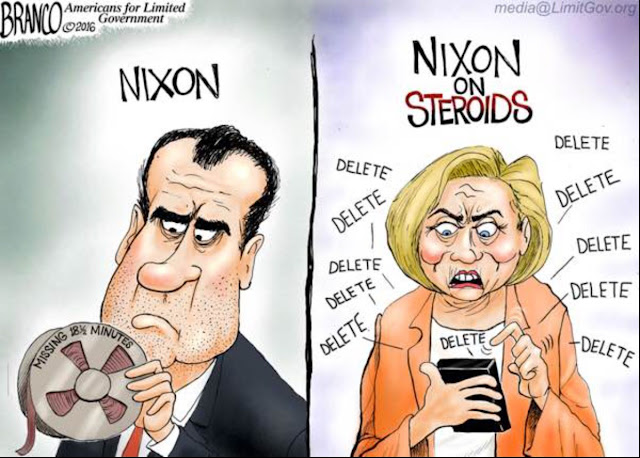 The irony that Hillary Rodham was involved with the Watergate Committee that brought down Richard Nixon on charges of Obstruction of Justice over a botched burglary of the DNC is so incredible as to make one believe that God himself is giving us a "clear text message".

Nobody died in Watergate and it had nothing at all to do with National Security. The burglary didn't change anything -- it was stupid, but McGovern wasn't going to win anyway. As anyone who has even looked at the debacle knows, "it was the cover-up" that took down Nixon.

I’d add that this was five months before she feigned ignorance when Fox News’s Ed Henry pressed her on whether she’d “tried to wipe the entire server … so there could be no email – no personal, no official.” Henry finally asked, “Did you wipe the server?” Famously, Clinton scoffed, “Like with a cloth or something?” But we now know, as the FBI notes recount, she had the server purged with a sophisticated software program, BleachBit, which eventually made it extraordinarily difficult for the FBI to recover her emails, several thousand of which were successfully destroyed.

We absolutely know that Hildebeast explicitly ordered evidence destroyed which DID have a direct bearing on National Security, and that the evidence was related to the Benghazi attacks where people, including a US Ambassador, DID DIE!

What really took down Nixon is that there were Republicans that still thought that there were things that were "above politics". What paved the way for Slick Willie, BO, Hildebeast,  and Trump is that by the time we went through Iran-Contra, plus the Bork and Clarence Thomas confirmations, it was totally clear that in fact NOTHING was above politics for "The Party" (TP-D), so all Tribes followed suit and the way was paved for BOistan.

NO RULES means NO RULES! So the Tribes fight over the declining scraps of the once great nation now a tribal backwater known as BOistan.