A Liberal Thought On Trump 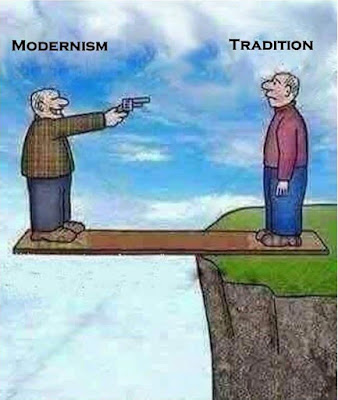 I believe the cartoon captures both the religious and cultural state of the west today. The moderns gleefully want to kill the culture, tradition, Christianity, Capitalism, the family, philosophic and often even scientific truth -- yet in their glee, they fail to realize it leaves them nowhere to stand!

The following is written by a liberal friend on FB. I know him to be intelligent and totally believing of the dominant left narrative taught in US public education, the media and entertainment. He is not an atheist, but has moved to become a modern secularized Christian, denying the Bible on at least sexually related issues like abortion, homosexuality and gender. As with all people of the left,  I certainly do not blame him in a human sense for "following the crowd". Holding the beliefs that I do is often costly in certainly friendships, some family relationships and possibly job and career.

While he as at times "unfriended" me on FB, I believe he attempts to be civil. I certainly have no trouble remaining his friend, FB and otherwise, because I hold this mortal coil to be but the most fleeting of experiences for our true eternal selves. To even consider judging or "unfriending" someone over the merely political would violate my own values, but given life in BOistan today, I fully understand why members of "The Party" (TP-D) feel they have no choice but to do so.

I'll summarize and give my views on the quoted FB post below.  He titles it: "Leave it Blank?":


Though I am clearly a Democrat, I live in this country, I work with lots of good people, and so I know lots of good people who are Republicans. Honest, moral people with integrity. They think there's a better way to go about governing than what Democrats do. I respect that.

And in a normal election cycle, I would expect them to support their "team president" because that person, the GOP Presidential Nominee, would represent their conservative values -- and would probably also be an upstanding representative of the kind of personal behavior they prize. Mitt Romney was not a "perfect" Republican for some conservatives and some Evangelicals, but he was/is Conservative, spent a long time as a public servant, and presents himself as an honorable, respectful man. John McCain was even better (the closest I've ever come to supporting a GOP candidate.) When their "team leader" is a person like these two, I can't blame Republican friends for supporting the leader.
What we have this time, though, is a candidate who quite simply does not represent the demeanor of a President, who doesn't have enough respect for the job, or the people with whom and for whom he'll have to work, to truly represent the kind of Republicans I know.

So, can those people really vote FOR Donald Trump, just because he's on their "team?"
Now, I don't expect most of them would vote FOR Hillary. I can dream, but I do recognize that Secretary Clinton is more liberal than they are. And there are really good reasons a traditional GOP Conservative would not vote for Gary Johnson, and Jill Stein -- well, if Clinton is too far left, Jill is not right for a Conservative either.

So, what I am wondering is this: Will these true honorable Conservatives just leave the Presidential candidate selection blank? I mean, in the future, whether Trump loses or wins, would these people want to have voted for him?

Or does some sort of "team loyalty" require them to do what Ted Cruz did --- go against the very morality which matters so much to them and vote Trump?

Now, I am sure I also know some Republicans who honestly support Trump. I don't get those people, but they are there. But they were not in the majority in the the early days of the GOP primaries, and many of that majority fought against Trump precisely because of the attributes he has continued to display.

I expected the "politicians" to fall in line -- I had some hope that Cruz would stick to his principles, but even he recognized the future political disadvantage of not being a team player.

But the average GOP voter does NOT have future politics to consider. They have to decide whether a vote for Trump is something which will weigh on their conscience in the future.

Now, perhaps Trump would not be another Hitler, as so many of us liberals (and non-US people) worry about. Perhaps the checks and balances in place would keep him from truly taking the US in dangerous directions. Perhaps, once his records are made available, we won't find anything impeachable, and when his financial assets are placed in a blind trust, he'll be unable to try to work the system for his personal benefit, and he'll stop trying. Perhaps the "only" thing he'd do is continually embarrass us until 2020.
But even if a President Trump is only embarrassing, will a typical Republican really want to admit, 20 years from now, "Yes, I voted FOR Trump" or will they just leave that part of the ballot blank?

That's what I am wondering today.


I voted for Carter, and I'm not "embarrassed". I was young, I had just been fully indoctrinated by 16 years of schooling, my family voted Democrat, so I voted for him. The loss of Iran as an ally certainly caused and continues to cause world problems. The miscalculation on Afghanistan also had far reaching repercussions. Could these had been avoided with a better leader? I firmly believe so,  but as with pretty much anything outside of proven mathematical equations, reasonable people can  and will vary in their opinions. My only claim to wisdom is the fear of God -- I prayerfully consider decisions and study hard -- I don't take credit for Reagan, nor blame for Carter. I doubt that will ever change.

I have no confidence in Trump as a leader -- as I have commented on the writings of Decius, I see this as the first of likely many Russian Roulette elections. Hillary is roulette with a semi-auto, Trump is a revolver -- at least for people that have nostalgia for the old Constitutional Republic that was America. Best to have an outside chance of a pause in our decent to totalitarianism. A Trump victory would be a chance for the left to revisit how they felt after Reagan, Newt as Speaker, or Ws election. People with a rightward tilt got to feel that way for the past 8 years -- only I suspect we don't feel it as deeply as they do, since politics is WAY below God for us.

BOistan is a territory based on no principles, save possibly the hope that "with more government everything is better".  2008 was the HUGE election, 2012 was the "kill shot" for America. America is dead already, many people are just not aware of it -- and some, (as I suspect the author of the post above) celebrate the "change".

If Trump wins, as Scott Adams, the writer of "Dilbert" expects him to, it will be a LONG way from any indication that "good things will happen". It will merely be proof that there are still a lot of people out there that oppose the ending of America that BO was able to accomplish. Any road back to a Constitutional Republic is going to be LONG and arduous. The most positive aspect of a Trump win in my mind is the potential for some level of national "dialogue", more likely to be a shouting match, since the majority of the Trump supports merely sense that things are broken really badly, but have no idea at all why America once worked, how it was destroyed, or how to rebuild it.

The left will of course continue to arrogantly dismiss all who disagree, as is covered here.

As the copied post tells you, loyal members of TP see no reason to even attempt to "reason" or consider any alternative views. Indeed, in BOistan,  POWER is all that counts, and increasingly it is coercive power as in "we will put you in jail if you claim Global Warming isn't gospel" (Exxon, NY).

The smarter TP members (like the post author) vaguely realize that once law has been abandoned, such mechanisms could theoretically be used by the opposition. I think they are wrong ... they forget the power of the administrative state, which only operates for left leadership.

For people who hold traditional Christian views, own guns,  etc we are left with no rational choice but to vote for the candidate who will be most opposed, which is clearly Trump.

Most of all, I wish for a renewal, which I believe must be a revival, of acceptance of Christ and Biblical principles as the transcendent values that the vast majority of Americans would be again in agreement on, and thus see government as FAR beneath those principles.

Government would be returned to being a SERVANT of both God and the people.  In America past, and I hope in an America or at least "remnant" of it, future, Christian friendship would FAR outweigh anything political, not only because one is eternal and the other but a tiny temporal moment, but also because God's Wisdom would be what drives the lives of a clear majority of Americans.

Both Trump and Hillary are so far from decent leaders that such a vision most certainly requires a miraculous intervention from on high. Both are likely to make such a vision less possible, but I see Hillary as certainly continuing on the path to Bible following Christians being directly persecuted -- a threshold we are perilously close to.