Hildebeast -- Can't We Just Drone Him? 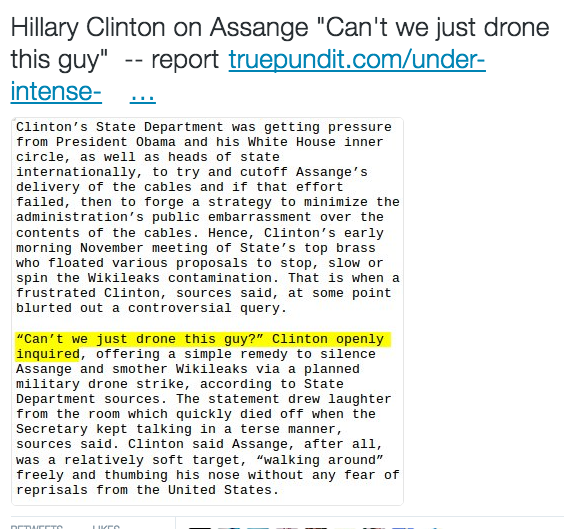 The Ron Paul article is worth a read as well. I think we already live where Paul is concerned we "might" live.


Assange’s fate, whatever it turns out to be, limns our own: if he goes down, then, in a sense, so do we all. Because what that means is that there’s no room for truth-tellers in our world, and no tolerance for heroes. And that’s not the kind of world I care to live in.


Sorry Ron, you live in BOistan, and it is already "that kind of world".

Oh, and Snopes considers the leak "unproven" (they likely still wonder about Alger Hiss),  goes through a long attempt to obfuscate it, and gives the "ultimate denial" from Hildebeast at the end ... "If I said it, it was a joke"!

Gotta love it! They certainly give Trump credit for the "it was a joke" in off the cuff remarks don't they? This would have been a "joke" at a State Department meeting, and if you read the whole thing it sounds like it went on for a bit more!

Does ANYONE honestly not see Hildebeast saying this? Oh, I know, "The Party" and her defenders won't admit it, but if they listen to Darth, I think we ALL know the truth!