Trump accuses Clinton and media of trying to 'poison the minds' of voters - POLITICO: 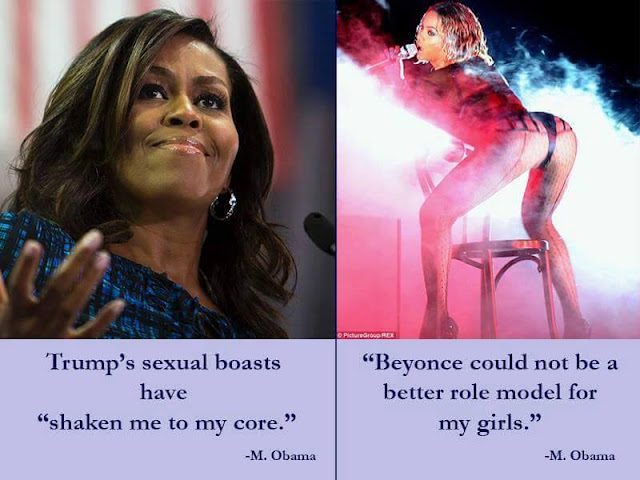 Actually it was BO himself who made the role model remark, but the point is simple. When POWER is your only "morality", hypocrisy is impossible. There is nobody in the elite of TP that has any problem with Trump's behavior, it is all and purely politics.

The memory of the sheep in BOistan is so amazingly short, and the propaganda so thick, that they are scarcely able to remember anything beyond what the media told them to think in the last hour.

The following is from Wikipedia:


The MoveOn.org domain name was registered on September 18, 1998 by computer entrepreneurs Joan Blades and Wes Boyd, the married cofounders of Berkeley Systems, an entertainment software company known for the flying toaster screen saver and the popular video game series You Don’t Know Jack. After selling the company in 1997, Blades and Boyd became concerned about the level of "partisan warfare in Washington" following revelations of President Bill Clinton's affair with Monica Lewinsky. [2] The MoveOn website was launched initially to oppose the Republican-led effort to impeach Clinton. Initially called "Censure and Move On," it invited visitors to add their names to an online petition stating that "Congress must Immediately Censure President Clinton and Move On to pressing issues facing the country."

So 18 years ago, "The Party" (TP-D) decided that even after "feminism" and countless hours of employees being lectured that "sexual harassment is whatever the woman FEELS is harassment", as with any other law, TP was above it. "The law" is just one more thing for TP to use for it's own political purposes, while it's own members in good standing are able to be completely immune to it. MoveOn was one of the mouthpieces to make this truth clear to the sheeple on the issues of sexual harassment, rape, etc.

The really sad part of this is that the natural moral sense of Christians and Conservatives can be used against them so transparently. When MoveOn was founded, they were "prudes, scolds and hypocrites" -- ANY sexual  matter that could be dug up on a Republican, was grounds on which their opinion on Slick was totally dismissed as "hypocrisy". People with moral standards are always beset by hypocrisy -- TP has the ultimate solution, no morals ... just POWER!

No matter what charge was brought against Slick, "it had nothing to do with the important job of the presidency" ... and we desperately needed to "Move on". It was shouted from every corner -- "The  French were laughing at us" for our "prudish attitudes on men in power". That always makes me change my positions -- nothing like cheese eating surrender monkeys finding a position "laughable" to turn my thinking around!

The true bottom line here is simple. TP has **NO** other concerns than POWER, and Conservatives and Christians DO. Most likely the charges will work, and in this case even better than the DUI "news" about W, brought out the weekend before the election to manipulate it. There is very little doubt it cost him 5-10% nationally -- especially in states like Florida.

It is hard to really care about BOistan. Things like Slick Willie establishing that the president need not be a person of any character or moral standard is exactly what makes either Hildebeast or Trump fully acceptible candidates for tribal chieftain of BOistan. "The standard" here is simply whatever TP decrees to to be.

The only quote I found worthy from the linked article is how far out of touch Paul Ryan is -- we ALREADY LIVE IN BOISTAN !!! Look around you! America was lost thanks to people like Ryan who failed to stand up and strongly oppose BO. Had the Republican party opposed BO half as hard as they oppose Trump, we might still have a country. They are just stopping at nothing to KEEP IT the way they want now.


“In the America they want… government is taken away from the people, and we are ruled by our betters, by a cold and unfeeling bureaucracy that replaces original thinking,” Ryan told an auditorium of students. “It is a place where the government twists the law — and the Constitution itself — to suit its purposes. A place where liberty is always under assault, where passion — the very stuff of life — is extinguished.”