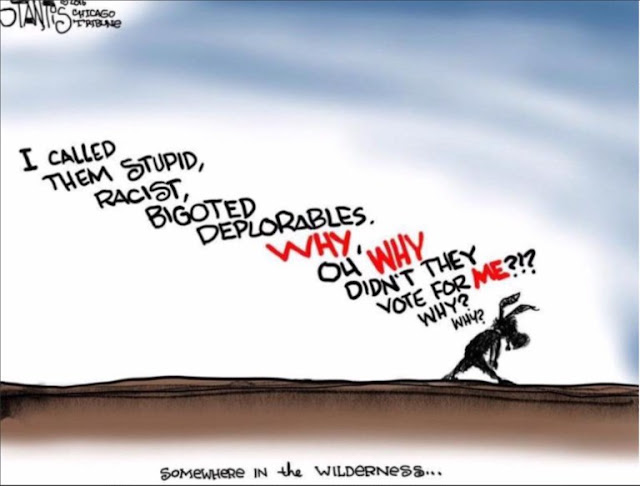 I’m sure I’ll ponder this  some more, but on my IA journeys I believe I see the insidiousness of “Political Correctness” more clearly.

In my youthful Baptist world, all one needed to do in order to dismiss people was to label them — “a drinker, a smoker, an evolutionist, worldly, etc”, and they were devalued. They were “not of the body”. I read Orwell and even a lot of deeper stuff (“Ideas Have Consequences”, “Road to Serfdom”) that make the power of words and labels eminently clear.  Then came Trump — racist, homophobe, misogynist (now THERE is a word that recently got A LOT of life!), imitator of people with disabilities, the next Hitler, etc..

Are we on the path of breaking free of simply labeling people and being done with them? I’m not sure the youth can imagine a world so strange that every human is a complex mix of good / bad / indifferent / paradox / hope / despair / love / hate / prejudice / fear / courage / compassion … etc, and it would be wrong to apply a label to someone and discount them as a human.

It would be so HARD to deal with each other as flawed humans, but each worthy of diverse, complicated and imperfect thought! Much harder than applying a label and being done with them! (perhaps even, or especially? if they are a family member?)

What if we found others worthy of respect even (and maybe ESPECIALLY?) when they disagree with our views?  What if a Muslim and a Christian that both believe through their religion that homosexuality is a sin, would be valued the same by a "liberal" ... as two humans with different, but in some ways similar religious beliefs?

What if the associational freedom for a designer to be able to decide if they wanted to design a dress for Michelle Obama but not for Melania Trump, or for a musician to play for Hillary Clinton but not Donald Trump would be thought of the same as for a baker to bake a cake for a Christian wedding, but not for a gay "wedding"?

At one time, it was allowed to simply label a person an "N-word", Jew, etc and dismiss them. We supposedly passed from that into what I think all hoped was a better world where labels were not acceptable. Sadly, the labels returned, proliferated and begin to be hurled at larger and larger groups of individuals -- each unique, and NOT defined by the labels increasingly applied to them.

Was "basket of deploreables" the point and which the magical power of labels "jumped the shark"? Might we have hit "peak labeling"? One can only hope.

It would be wonderful if the great dragon of Political Correctness has been mortally wounded and we start dealing with people as people as opposed to labels.

Such a subversive thought for our times!