I'm only 1/3 of the way through this pompous and ridiculously wordy leftist tome, but the thought has occurred to me that I may have been snookered. Supposedly, a lefty acquaintance read it, was really impressed, and was willing to read Thomas Sowell's "A Conflict of Visions" in a sort of a "ideological exchange". I'm hoping he didn't this book ... at least not too closely, and perhaps was feeling bad because some of his friends had so figured he would snooker me into reading it and writing a review to save him a lot of time wading through turgid prose.

The big picture summary so far seems to be (unsurprisingly) that "Government is God" ... little events like industrial revolutions, world wars, mass communication, computers, the internet, etc have minimal effects. The key to everything is a properly balanced "mixed economy" -- with government being the senior, virtuous, intelligent partner in the decidedly unequal "partnership" with greedy capitalists, biased research not properly funded via tax dollars, etc.

Ergo, the success of the US from 1946 - 1970 is PROOF that a properly balanced "Golidlocks"  mixed economy is what made this country rich! Simple.

The other leading world economies being bombed to ashes while we were unscathed save Pearl Harbor, and thus supplying damned near everything for their remaining populations to recover isn't mentioned -- so clearly not a factor. That time period being the rollout of all sorts of technologies, plus a burst of growing children (us, the vaunted "boomers") was also not a factor. Keep repeating GOVERNMENT!

Unsurprisingly, the book seems to lack a single chart (I have the Kindle version, so maybe that is the issue). You see the mixed economy was "balanced" until sometime around Reagan, and it has been grossly too small since then, thus accounting for all our problems -- well except for PeterPeterson and Ayn Rand, but I haven't gotten to the conclusion of their nefarious deeds yet. That is why you see in the following chart the huge and continuing drop in government spending as a percentage of GDP starting around 1980: 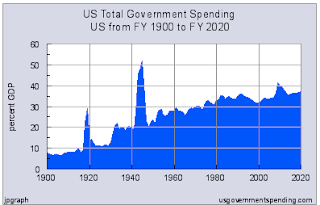 You don't see it? Well then obviously you are not a liberal, and likely under the influence of Ayn Rand or Pete Peterson -- perhaps you should seek psychiatric care. I must confess, I seem to have a similar issue. I'm guessing that means I'm a clear victim of "amnesia" -- perhaps the use of data and charts is a symptom?

Well, in my obviously incorrect world, government as a percentage of GDP has actually GROWN steadily! From just over 20% to just short of 40% today. To the extent it was "balanced" from 1945 to 1980 and we became amnesic about it, the proper level of spending would be "20-25% of GDP". Strange.

Oh, they seem to think that MORE REGULATION will help ... so that must be much lower. Hmm ... 2015 was a record year for federal regulation, surpassing the old record set in 2010. Admittedly, that was a "scant" 81,611 pages -- expertly rolled out by an administration brilliantly led by Obama. I'm sure each of those highly effective contributions to the proper functioning of our mixed economy was a gem of great value!

Now it could well be that pages of regulation as a percentage of population, GDP, or unicorn farts IS actually out of it's "proper mix". However,  other than "more, more, more", being nefariously blocked by Randian Republicans cruel and foul, actual assertions about "what is the goldilocks amount" (mysteriously achieved from 1946 - 1975) remains a mystery not deemed worthy of revelation in this lengthy tome.

What IS very obvious to me at this point is that the authors of the book are very much in the "unconstrained" vision where the latest is the greatest (unless a Republican gets elected) and more government is ALWAYS better -- data and charts are a distraction. They are so smart that anyone not feeling grateful for their efforts in explaining all this is clearly a Neanderthal and likely voted for Trump. I did --- mea culpa, mea culpa!

On to the rest of this brilliant treatise ... I'm sort of imagining a "Raiders of the Lost Ark" plot where Pete Peterson conjures the spirit of Ayn Rand and they hypnotize most of the population of the US to use numbers and data and such to attempt to understand reality -- thus becoming "amnesic" about the TRUE reality being described in the book.

Well, back to the excitement!

**** I am sort of joking -- I think the "slight" point they missed (or more likely just left out) is that the Democrat purchase of votes via FICA, medicare, BOcare, etc is sucking up way too much of the total government cash now and they need VASTLY more money to support the house of cards "entitlements", PLUS reign in those nasty capitalists. The actual "properly balanced mix" for "liberals" always ends up being 100% government control and guys like me either at room temperature or sitting in a gulag on the N slope of Alaska munching rat in a tent.
Posted by Bill at 4:14 PM