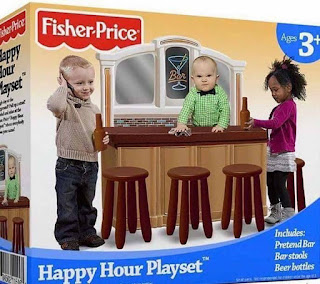 The media is currently in the mood to do stories on "fake news" as if this was a new phenomenon -- and somehow significantly responsible for the election of Trump. Maybe we should belly up to the Fisher Price Happy Hour Playset and order a stiff one.

Fake news is not a new phenomenon ... in the '90s, Janet Reno went all in on it relative to "The Little Rascals" day care center, and people went to prison over fake news.

Dan Rather lost his job because he tried to use a forged document to influence the election in 2004 on top of the already fake, or at least manufactured "news" about W's career as a TX National Guard fighter pilot 30 years earlier.

Here, the NY Times reports breathlessly on the works of a gentleman who woke up one fine day and drove to DC to "investigate" if Hillary was leading a child sex ring out of a pizza parlor. He wanted to to "shine some light" on the sex ring, and on the "spur of the moment" he decided to take his AR into the building. He points out to the Times that "the intel on this was not 100%" ... news at 11. I'm glad they straightened THAT out! Certainly there is no chance that his mental state (or Janet Reno's in the '90s) had anything to do with his actions. 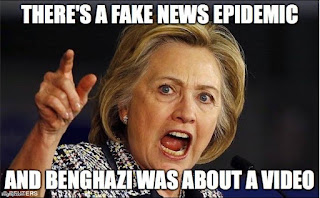 As Hillary (she of landing in Bosnia under sniper fire and reporting how Benghazi was caused by an internet movie) intoned; "One danger is the “malicious threat of fake news and false propaganda that flooded social media over the past year,” said Clinton. “It’s now clear that so-called fake news can have real world consequences” including for the “lives of ordinary people,” she said. “It’s a danger that must be addressed and addressed quickly.” 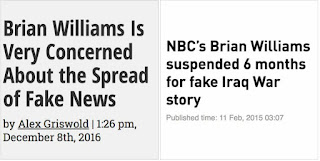 In news of the surreal, Brian Williams, he of "my chopper was shot down" also has entered the fray against the dastardly "fake news". How many times have I pointed out that living in a "post truth" era has "issues"?

This is simple folks. NEVER trust a single source! EVER! If only one side of the ideological spectrum is reporting it, it is very likely fake. If the MSM is all over it, it is likely at least "unimportant" -- it may or may not be true that W Bush wasn't a real "Top Gun" 30 years ago, but it certainly wasn't important to his presidency -- especially for his SECOND TERM which is when Rather lost his job!  If a woman drives into Langley every day, her credentials as a "secret agent" are at least highly suspect and "outing her" is not very likely to be a matter of national significance -- in the old days, fake news used to be much father reaching than it has been during the 2016 election!

We could go on, but if you read this blog, we don't need to. The current fake news "news" is obviously this weeks ploy for the left to explain Trump without having to engage in any soul searching as to their own policies, rhetoric, etc.  The more they avoid taking responsibility for the election the better -- when your opponent is intent on staying stupid, the best thing to do is agree with them!
Posted by Bill at 8:31 PM