This was the ad on FB today to purchase the NY Times. "Built on Paper, Based in Fact". 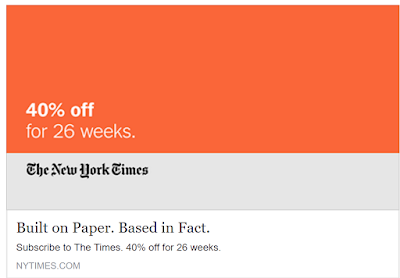 The NY Times was once at least real vs "fake" news. Extremely biased news, yes, but providing a view that had a connection with reality through the bias of the left. No more.

On Monday, members of the Electoral College will vote in Donald J. Trump as president. Though he lost the election by nearly three million votes and almost daily generates headlines about new scandals, the Democratic Party is doing little to stop him. If you’ve been asking yourself “Where are the Democrats?” you’re not alone.

The US, nor BOistan as of yet, has NEVER elected the president by nationwide popular vote. If we had, every election save maybe  1964, 1972, 1980, and 1984 would have been in nationwide recounts for months if not years.

Elections in the US have ALWAYS been run with the Electoral College (EC) system, and the candidates manage the campaign to win in the EC, not in the popular vote. Hillary's popular vote "win" and EC loss is proof that she mismanaged her campaign as she has everything else she ever touched.

In the NFL, the team with the highest number of points at the end of the game wins. The NY Times claim above is the same as a team that lost on points but had a greater time of possession for the game, claiming "they won".  The game would be played vastly differently if the rule was time of possession vs points scored for deciding victory. Elections would be run VERY differently if the popular vote was used to decide victory. Claiming that the popular vote is anything but meaningless is Fake News.

However, the insanity of the paragraph and column goes beyond that not so subtle point and points to the very heart of total liberal inconsistency. The claim of Hillary having "won" due to the popular vote is false BECAUSE we have an Electoral College, but that doesn't stop the liberal mind from saying -- so on one hand, we decry and refuse to accept the EC system, but on the other, we want to use that very system to overturn the election! The only thing consistent about liberal "thought" is the same as that of a two year olds "thinking" -- I want my way! End of story, period, full stop!

So the column continues with this fine paragraph

There’s no shortage of legal theories that could challenge Mr. Trump’s anointment, but they come from outsiders rather than the Democratic Party. Impassioned citizens have been pleading with electors to vote against Mr. Trump; law professors have argued that winner-take-all laws for electoral votes are unconstitutional; a small group, the Hamilton Electors, is attempting to free electors to vote their consciences; and a new theory has arisen that there is legal precedent for courts to give the election to Mrs. Clinton based on Russian interference. All of these efforts, along with the grass-roots protests, boycotts and petitions, have been happening without the Democratic Party. The most we’ve seen is a response to the C.I.A. revelations, but only with Republicans onboard to give Democrats bipartisan cover.

And we could look elsewhere in the MSM and likely the Times itself on the same day and see articles decrying "fake news", or the "post truth world". In fact, I entered the above, got into my car and headed for my workout with NPR on. They were in a full hour segment on "Fake News". Their advice? Listen to NPR and read the NY Times -- irony comes quick and thick in BOistan.

There is no longer a "paper of record". Yes, this is the "opinion page", but the editors of the NY Times think this is worthy of appearing in their paper. They don't see this as utter madness, but rather a "reasonable opinion".

If this "opinion" is taken seriously by a significant number of BOistanis, then violence will be the only way to transfer power away from the dominant party -- and make no mistake, "The Party" (TP-D) is STILL the dominant party. They own the bulk of the media, the vast federal bureaucracy, education, entertainment, and the bulk of the legal system.

Are we there yet? We are certainly close to that point for sure.