Fascism, You Keep Using That Word

Fascism is one of those terms that fits in with "Hitler" on the hit list of left wing name calling that is constantly used by people that don't understand what it means -- they may as well just say "bad", or "evil" to anyone that knows history at all.

While we are at it, let's make sure everyone is on the same meme page. The reference is from "The Princess Bride", the link gives a little background. 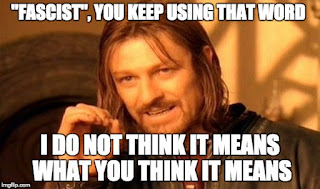 I've covered this umpteen times, using "Fascism" and "Hitler" to refer to the political RIGHT is like walking up to me and calling me "Miss" ... for those that don't know me, 6'4", 300ish, bald and bearded. I covered left vs right in detail here all the way back to the French Revolution.

The linked Sowell article has the following:

Unlike the Communists, the Fascists did not seek government ownership of the means of production. They just wanted the government to call the shots as to how businesses would be run. They were for “industrial policy,” long before liberals coined that phrase in the United States. Indeed, the whole Fascist economic agenda bears a remarkable resemblance to what liberals would later advocate.

The article also references the excellent work "Liberal Fascism" which I have reviewed.

The bottom line here is that in a post-truth tribal nation, the best myths win, so there is NO WAY the leftist tribe will be giving up the left-right inversion, Fascism, Hitler, etc mythology. They are not about to own "National Socialism", let alone Mao, Pol Pot, Stalin, North Korea, etc ...

I'm not sure if Trump will be able to establish any really good mythology that works, but he certainly keeps throwing stuff at the wall. The best myths have very tiny pieces of truth and give those that believe in them a "slam dunk" -- "truth" at a general level is antithetical to myth making, since the truth is very rarely anything even close to a "slam dunk" on anything more complex than 2+2=4.

If you want to explore, where you are on a slightly more sensible scale than MERELY left and right, this is an interesting site -- CERTAINLY far from any sort of "perfection", however I think an INDICATOR worth considering.  Here is my result. 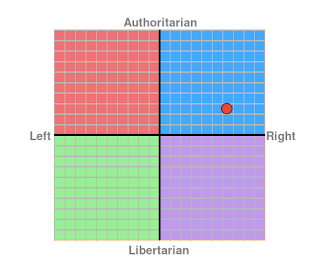