Journalists and Lefties, Goose and Gander 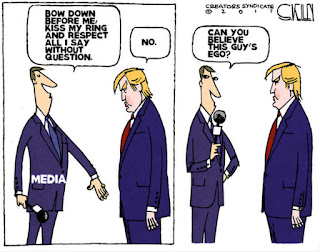 Naturally, when BO targeted the media, including jailing some, it was "all good", after all, his heart was always in the right place, and anyone that disagreed with him was racist, homophobic, etc ... you know, "deploreables".

When Mr. Obama was elected in 2008, press freedom groups had high expectations for the former constitutional law professor, particularly after the press had suffered through eight years of bitter confrontation with the Bush administration. But today, many of those same groups say Mr. Obama’s record of going after both journalists and their sources has set a dangerous precedent that Mr. Trump can easily exploit. “Obama has laid all the groundwork Trump needs for an unprecedented crackdown on the press,” said Trevor Timm, executive director of the nonprofit Freedom of the Press Foundation.

BO also made it frequently clear how much he disliked Fox news. Naturally, since the left hates "Faux News", they approved heartily.

When one is a lefty, the assumption is not only that your positions are right/good/moral/etc, and the other side is wrong/stupid/evil/etc, but also (and importantly!) that you should be protected from even having to hear those positions, other than to be aware that "wrong/stupid/evil/etc" exist out there in "flyover country".

Your definition of freedom means freedom FROM having to be exposed to alternate viewpoints including signs and symbols of Christianity. Typically, you are so sheltered that as your own lefty president targets media, you are not even made aware by the same media that you believe to be "unbiased", and then you have a cat when the shoe is on the other foot.