Trump's Wiretap Claims: What We Know and What We Don't | The Weekly Standard: 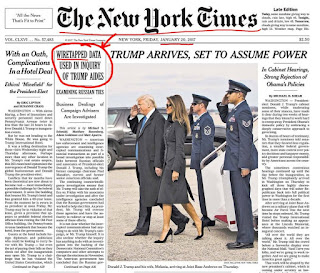 We live in largely separate echo chambers of media narratives, but Trump is breaking down those walls and causing general discomfort to most people in their comfy chambers hearing the narratives they expect with all the appropriate spin they also expect. Last weekend, Trump tweeted the obvious -- in order to gather all this supposed "information", the BO administration must have been investigating the Trump campaign -- Watergate where the FBI, NSA, CIA play the role of the "Plumbers".

The picture IS of an actual NY Times front page, but if you go off to Snopes, they will "explain" that the article has nothing to do with wiretapping of Trump ... so much for skimming NY Times headlines for "information" ... a headline in the NY Times stating Trump was wiretapped should NOT be construed to be "evidence" that he was wiretapped. So much for using the NY Times as a "source".


The right wing media got all wrapped around the axle about the Times "changing the headline" in the digital issue -- but in fact they just used a different headline when they put it up to digital originially -- a version of "a man accused of killing three men and a dog produces the dog alive" ... only in this case, he maybe comes up with a dead dog and the three men show up in court to testify that he murdered them. We have arrived at surrealism.

The Administrative State was clearly (and probably still is) investigating Trump -- otherwise we would not have all the "leaks". Either BO told them to, allowed them to, or was incompetent and simply had no clue about a major misuse of government power. He should be jailed -- ideally, he should be executed (slowly), but justice is so rare.


The following from this excellent article.

In short, the media and Democrats have been playing with fire for months. The use of law-enforcement and national-security assets to investigate one’s political opponents during a heated election campaign has always been a potentially explosive story. Let’s not kid ourselves: If the roles were reversed, and a Republican administration had investigated officials tied to the campaign of the Democrats’ nominee, we would be drowning in a sea of Watergate 2.0 coverage.

And all of a sudden, the Russian Narrative appears to have gone "poof". I suspect that the NY Times, WaPo, NPR, Nancy Pelosi, etc just realized when they saw the Trump tweets, that they don't officially have a single branch of government under "The Party" (TP-D) control. The Republicans CAN run an investigation of "Why was the BO administration or the Administrative State that they are supposed to be responsible for, investigating the opposition campaign?".

They looked around and decided, that BO and Hildebeast could just as well be targets as Trump and his administration -- and in fact, Trump is in the WH and Republicans are in both houses of Congress. Sure, TP still DOES own the Administrative State (AS) and the big media, but their "ownership" of the AS is supposed to be a "secret" -- it can be fully open when they own the White House, because in THEORY the president is supposed to be in charge of the AS, and **IS** when the president is TP. When the president is not TP, the AS needs to fake like it is under his executive authority!

I'd argue that the biggest challenge that Trump faces if he really does want to "Make America Great Again" is to put the ultimate control of the AS back under CONGRESS -- supposedly that is where their "law powers" are delegated from, since it is CONGRESS that can make law as well as control funding.

Trump ought to be able to hire and fire AS personnel at will, raise or lower their salaries, cut their benefits, etc. If they want to do things to cause him embarrassment or ignore his directives, he ought to be able to fire them just as Reagan fired PATCO. He is the CEO ... the alphabet government is supposed to be under his executive authority, with powers only delegated to them from congress.

I've been shocked this week to see how quickly the whole MSM has shut up about Russia!  If this continues, I think we can be certain that BO in fact either ordered Trump tapped, or looked the other way as it happened, and the tweets hit a bit too close to the bone -- TP really doesn't want to see BO in prison.

Let's get the SCOTUS firmly switched, the AS defanged, and THEN maybe see if BO can't be put behind bars where he has belonged since he destroyed the health system and lied to the American people about how we could "keep our healthcare". I wonder if he would still wag his finger the same way behind bars?

"I am the greatest president to ever be in prison. Just today, I was telling some guards about how I know more about prison than any prisoner in history, I know more about being a guard than they do, I am simply smarter, smoother and better in all respects than even the warden. I should be warden ... I'm certain he agrees, I just need to explain it to him better. I've been explaining how to make this a better prison -- I know I have a lot to do, but I work hard and I simply think more and more deeply than anyone I've ever met. I know I will be remembered as I have said that I will be. I'm glad you gave me this chance to explain how great I am doing here and how I will continue to be the kind of success that only I can possibly be!"