Healthcare is one of the most frustrating things to talk about. Some of the reasons include:

One primary factor that could start the journey back to America from BOistan is the old motto of IBM; "THINK!", or as put by Henry Ford "Thinking is the hardest work there is, which is probably why so few engage in it!" 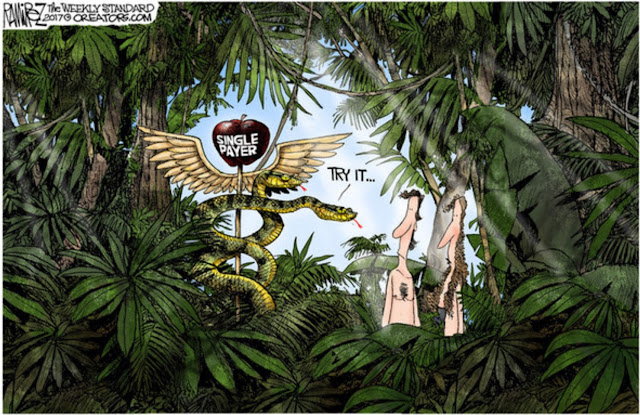 Thinking about things that are HARD, and do not agree with our idea of pleasure, or even being on the PATH to pleasure, is especially difficult. When the majority of those around you decide to write off personal freedom and responsibility in favor of the herd, that can make it even tougher.

The two articles linked at the top provide some alternative views which I suspect we all know to be true if we just THINK rather than "feel or hope" for a few minutes ... here are the highlights.

The Godzilla in the room that neither of the articles covers is the plight of the black population in the US. Essentially, they are living in the 3rd world, while the white population enjoys being essentially in Switzerland or Norway. I could also spend a lot of time on the fact that infant mortality is one of the big measures used for quality of healthcare, but it is also one of the areas where there are HUGE differences in how the statistics are done. This is an EXCELLENT article that points out those difficulties, however if you have already made up your mind for Universal Suffering, reading it would be too painful -- better to write it off.

Oh, and in the interests of how bad being "taken care of by the government" works no matter what your race, it turns out that there is an epidemic of poor white people dying. Broken families, loss of community, leaving religion, welfare, not being employed, etc is just as as terminal if you are white as if you are black -- only time will tell if orientals have a stronger resistance!

The bottom line here, that I really think we all know to be true if we calmly THINK for a few minutes is essentially this:

In my current line of work, one of the biggest mantras is NO FIXING. Our mental health system is loaded with people that have lost their ability to think independently. They have been so "fixed" by doctors, institutions, family and government that they no longer  believe they have any personal power remaining. They have stopped struggling.

For most of those that read this blog, the struggle will not be given up -- yet. We will continue to live in private housing, tend our retirement funds, keep up our private transportation, and if the suffering of healthcare becomes "universal", we will opt out of that for a much more expensive private option as long as we can.

Some of us may feel positive about that -- much like choosing to feel positive about paying into the giant FICA ponzi scheme in the same manner as the optimistic man having fallen off a 100 floor building yells out to the person on the 20th floor, "all good so far"!

Does anyone with over a 100 IQ NOT understand all this? I personally don't believe that. I believe that in our bones, we totally "get it", just like we understand that we and our loved ones most certainly will die! However, we are masters of compartmentalization and when the whole government, media, education and entertainment is marketing to us to just settle back and enjoy the ride on the gravy train, it is EASY to do.

It is easy, but of course it is deadly -- to people, to families, to nations, to civilizations.

It certainly happens to companies -- IBM was spiraling down in the late '80s, Gerstner leveled it off and gave a little uptick in the mid '90s, but the bureaucratic forces were too strong and all that remains is the corpse of a once great company. Much like here in BOistan, the corpse of something big can hang around a long while -- sure it stinks, but much like pumping hog manure, most people get used to it!

As we say in DBT, pain is inevitable, suffering is optional. By accepting basic truths like "80-90% of people have to pull their own weight in EVERYTHING ... food, shelter, transportation, clothing, healthcare, entertainment, etc" or the system is going to break at some point., we deal with the "pain" of that truth, but we avoid the suffering of the disaster when the truth is ignored.

When systems go the way of the US and Europe, they become corrupt as more and more seek rent from the transfer of funds from the makers to the takers and the ranks of the makers dwindle while the takers swell. Naturally, the folks doing the transfers become greedy/wealthy, so they demand that their wealth rise (see Davos, Wall Street, 4 wealthiest counties in the US suburbs of DC), thus there is less and less for the swelling ranks of the takers, while the take from the makers has to ever rise ... thinning their ranks and making their lot less and less palatable.

Universal Suffering -- the inevitable outcome of socialism of all types in all times and places.

(other writing on the topic).

Email ThisBlogThis!Share to TwitterShare to FacebookShare to Pinterest
Labels: healthcare