The New York City skyline the evening of Easter Sunday in 1956. : nyc: 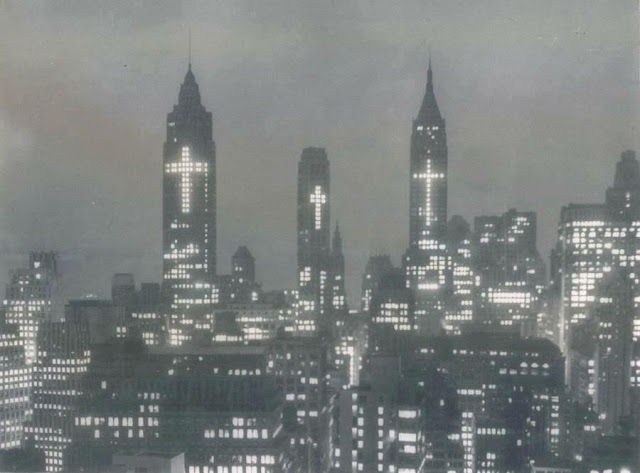 Engle vs Vitale removing prayer from the schools would not be decided by 9 men in robes until 1962. In a nation with a Constitution and a Supreme Court that followed it, it would have taken a national discussion and a Constitutional Amendment to remove voluntary prayer from our schools.

Naturally, "progressives" (regressives) will talk of (Democrat) Jim Crow in the South, their gains in the killing of babies and the joyful life of gays in America ... about 4x more suicides than the general gay population, UP from 1956.

Regressives would tell us that "things were worse for gays in the 1950's" ... statistics would tell us that there is a marked increase in earlier suicides after 1970 ... actual results of the application of regressive beliefs is not one of their strong interests.

Despite the stable prevalence of reported parasuicide over the different birth cohorts of men studied, the trend for younger mean ages at first attempts and increased rates over time of suicide attempts before age 25 is striking. Although ample evidence documents a marked recency bias with respect to the recollection and reporting of serious psychiatric symptoms,74 this does not fully explain the dramatic decline in mean age at first suicide attempt after 1970. The increase in rates of attempted suicide noted among adolescents in the past several decades75,76 may play some contributing role but by itself does not seem sufficient to produce these changes. Although no evidence is available to explore this question, it is possible that historical context had an effect, given that the 1969 Stonewall Inn riots in New York City are widely viewed as a marker of the birth of the modern “gay liberation” movement.77 The parallel declines during this period in age at self-identification as gay or bisexual along with age at first or only suicide attempt48,57 provide further suggestive evidence relating suicide attempts to stresses associated with “coming out.” This evidence seems to run counter to expectations regarding the effect of an emergent gay culture and the prospect of earlier self-identification as gay or bisexual, including those expectations raised by Humphries78 2 decades ago.


To anyone familiar with human nature since Old Testament times, the results of the change from America to BOistan experienced over my 60 years are exactly what God and those that fear him understand always happens.

Things like the Voting Rights act would have broken the stranglehold of the Democrat Party in the South, and thus Jim Crow in fairly short order without SCOTUS further messing up States Rights. Has abortion made women better off? Was it worth 60 million lives for that "improvement"? How about the destruction of the family? Has that been a "big win"?

We have ALL sinned and come WELL short of the glory of God. Heterosexual sex within marriage is God's standard ... and lusting after the woman that wears her yoga pants well is just as eternally damning as a lifetime of gay sex -- sin is sin.

It is also not really our "desires" that are the issue. It isn't the alcoholic's desire for alcohol that is the problem -- it is that alcohol comes to control his life, so he must with the grace of God be able to resist that desire in order to live in this life. That has nothing to do with heaven -- I'm quite certain there will be many alcoholics in heaven that were not able to beat the bottle on earth, but relied on the grace of God and were most heartily sorry for their sin.

My belief is the same for divorce and remarriage. They are against God's will and remarriage is "living in sin" -- much as I have my own persistent sins that give me ample opportunity to be "most heartily sorry" at each communion. Even when I fully beat my sin of gluttony and approach the altar lean and with washboard abs, I can assure you that my contrition well will not go dry.

Perhaps the male whose eyes never settle too long and appreciatively on the female form can cast a stone here that my standards are set too low. For women, I do not know -- I have been assured that they don't sin and are always right.