Every man should have a woman who looks at him the way the President of Croatia looked at Trump | Conservative News Today:

The relationship of women to alpha males is sometimes complex, but not always subtle. 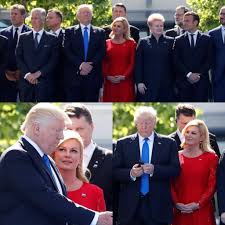 While modern "science" and certainly politically correct socialization would tell you there is no such thing as gender, men and women are the same and sexuality is entirely a social construct, etc etc, we do actually still have male and female plumbing fittings (I'm sure that would have been outlawed had Hildebeast prevailed), and procreation actually still involes a certain ordered fitting of body parts.

So, sometimes powerful, confident females are attracted by males that stand above the other males both in physical and personal power. Obviously the women showing their "power" in pussy hats object to this sort of disply with the strongest whining they can muster.

It is as natural as "boy meets girl", which of course makes it abhorrent to the modern "progressive". Even worse from the leftist abandonment of personal responsibility standard, humans are entirely able (sometimes with significant difficulty) to not react to all our quite natural urges -- even on the left, the majority remain potty trained (so far), but same sex attraction is absolutely NOT controllable!

Since the left is certain that "Trump is Hitler", we might want to just consider the "small" difference between Trump and Hitler relative to his relations with the opposite sex. I understand that for the left, the only interesting sexuality is the current plethora of non-heterosexual options which of course are "major and defining" to every aspect of life, with no potential for character or conciousness to have an effect.

Here is a shot of the lefts favorite National Socialist with his final love interest -- you might want to look at a picture of Trump and Melania to see if you can detect slight differences. 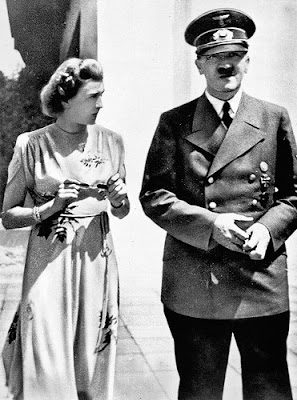 Again, I realize that I am a moose of another time. Sexuality today is only significant when it is NON heterosexual, in which case it is the most significant part of a persons life and can't be ignored for even a second. I DO understand what I have been told -- it is just that the last shreds of independent thought have not quite been beaten out of me (yet)!