Taking Down ALL The Institutions

Some dare call the anti-Trump feeding frenzy a “coup” attempt:

I prefer to call it the 2nd Civil War,  because of the 60+ million people on "the other side" from the similar 60+ million that support "The Party (TP-D)".

Within that war however, we have been seeing the Coup Attempt (CA) since the day after the election. TP still controls the Deep State, most of the judiciary, the media and academia. It's entire mission has been stop Trump from being certified as President, taking office, and now to remove him ... that isn't going to change ... probably not even if he IS removed. it is doubtful they would really be much more sanguine about Penz.

The fact that "the Russian story" is so flawed as to be hillarious has no effect on D's ... you want to see "collusion with the Russians"? Try this:

Want to gaze at what shady business deals and pay for play with the Russions looks like?

That's just ONE contribution to "The Clinton Fund" ... Funds, for Clintons! Most of the estimates put the "take" for the Clinton's to had 20% of US uranium reserves to the Russians at $50 million or more. Want to look a some more "collusion"? 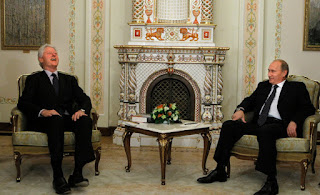 We are not talking "hypothetical" here, we are talking about the Russians ACTUALLY having got 20% of US uranium reserves!

Elections? We can see that TP is not about honoring those when they go against them. Russians?  Hey, as long as "D"s are selling off US assets for 10's of millions, it is a laughing matter -- now? Spare me the "oh, this is a SERIOUS matter!".

The ONLY thing the D's care about at the moment is getting Trump out of office. Invalidating an election? Who cares.

BOistan is where selling anything is OK -- as long as you are in TP. You MUST be in TP!