The Party Declares It's Champion

James Comey and the Revenge of Washington’s Professional Class - The New Yorker: 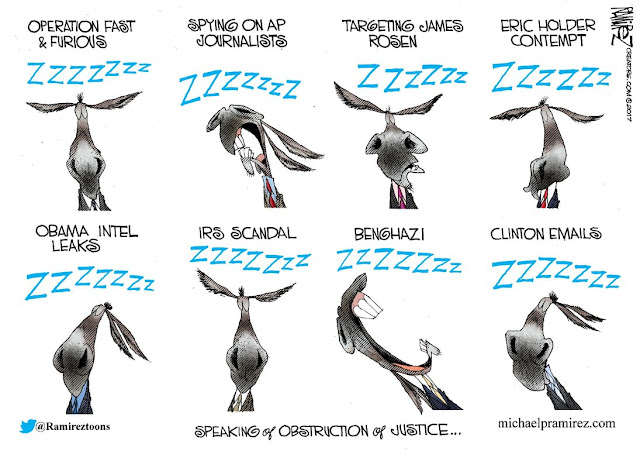 Beginning with FDR, flexing it's muscles in Watergate, and growing more powerful ever after, The Party (TP-D) has created, nurtured, and made it's main instrument of power the Administrative or Deep State (DS). No matter what temporary occupant sits in the White House or party sits in control of Congress, the Deep State abides, and it is not a comfort to those that loved America, liberty, or morality. As the linked New Yorker column puts it:

Washington is a lawyer’s town, built on protocols and rules. If this tends to make happy-hour conversation in the city a little more pedantic than the American norm, then it also has its advantages, among them a fanaticism for records.

As I've often written, lawyers in the US are "The House" as in the gambling sense, and the number one rule of gambling is "The house WINS!". It has to, or there would be no Vegas, State Lotteries, or Casinos dotting the landscape. At any moment, lawyers are always the majority in all the legislatures and the US congress, plus they have their own branch of government, and since at least the early '70s, they also own the now most powerful "hidden in plain sight" branch of government, the Deep State.

The common thread is lawyers. Both political parties are significantly by and for lawyers, with TP being especially by and for lawyers. I'm not trying to say that lawyers are "bad people", merely that as lawyers, they have been schooled to view the world in a very specific way, and that way is not what America was -- lawyers are indeed people, but WE THE PEOPLE are not to be subserviant to a ruling lawyer class. This is why government was to be strictly LIMITED!

As the excellent cartoon at the top reminds us, "obstruction of justice" is "TP normal". IRS decides to target conservatives ? Lois Lerner takes the 5th, a bunch of computers turn up wiped, and BO declares it over -- hey, don't expect the Deep State to investigate itself!

BO's justice department goes after a conservative reporter trying to find out about leaks?  Well, most people don't even know it happened -- and it is CERTAINLY no concern for goodness sake! The "good guys" (BO) went after the "bad guys", (Fox News) ... nuff said! What is the use of having a huge weapon like the DS if you can't use it to destroy your enemies?

Many "progressives" have pointed out how "scandal free" the  BO disaster was ... to the blind, coal tar and snow may as well both be pure white! BO decided the investigation of Hildebeast on 60 Minutes "She had no intent to break the law, and no secrets endangered national security" -- oh thank you great and powerful BO for decaring the conclusion of FBI "investigation" prior to it being over! (no "obstruction" there!)

BO ENDORSED HILDEBEAST ON JUNE 9th and Comey didn't fold the investigation until July 5th! Now, ostensivly, it was Slick Willie meeting with his boss on a plane in AZ on June 30th  that convinced Comey"it's over", rather than the POTUS endorsing a person under investigation by the FBI, but REALLY folks! The POTUS ENDORSES a person under active FBI investigation to take his job and that is NOT "obstruction"? Hello? Welcome to BOistan! Does not endorsing her for POTUS more than "imply" that "she is a nice lady and I hope the FBI can get by this so she can take my job". Even TP has not YET put in a CONVICTED felon ... many of them are felons, they just don't do the "conviction thing" because, well ... TP!

Perhaps the "BOistan Constitution" should just say that "in the unlikely event that a person that is not a TP member in good standing is elected, a set of "Special Prosecutors", "Commissions", "Independent Councels", "Czars", etc  must be immediately appointed to investigate what are clearly "high crimes and misdemeanors", because someone not sworn to fealty to TP has ostensively gained power!" To TP, that is certainly a MAJOR crime!

We really didn't need to investigate BO ... his own book made it clear he wanted to destroy "the colonial powers" -- and he did a hell of a job on at least one of them!

Can Trump beat these bastards? Who knows, but BOistan  SUCKS!