The Weird Moment You Know You Are a Sheep

The weird moment on Colbert’s show that captured our political whiplash - The Washington Post: 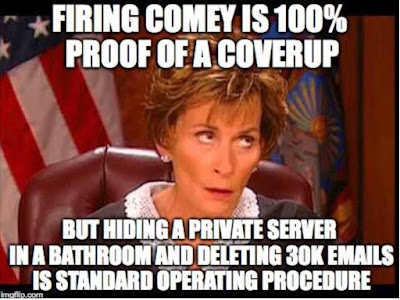 I'd argue that even though the media claims there to be many mindless Trump followers, there are few. The MSM has made quite sure that anyone that is not their abject follower has a mind of their own -- it is harder to make someone with a mind of their own become convinced that they oght to bleat however their shepherd asks. Christ is of  course the GOOD SHEPHERD ... bleating to his call is a joy. Steven Colbert? Well ...

The news of James Comey’s political demise had broken less than 10 minutes before Stephen Colbert began his late-show taping on Tuesday evening. And when he informed his live audience, trapped in a dead-zone soundstage — “the FBI director has just been fired by Donald Trump” — they initially reacted by breaking into cheers.

This was a man, after all, that Colbert’s liberal-leaning viewership had viewed as a bad guy. He raised Hillary Clinton’s email scandal from the dead; he might have cost her the election.

The poor sheeple hadn't been told what to think yet, and they have no minds of their own. Their leadership had told them Comey was a BAD MAN ... he was one of those evil people that had cost St Hildebreast the office they had been assured she richly deserved and was guarenteed to get! Many TP leaders had called for Comey's ouster -- certainly the ouster happening must  be GOOD NEWS!

Much like retailiation for the use of  chemical weapons by Syria -- why the great BO had drawn a "Red Line"!! which would normally seem quite warlike if someone with testicles was saying it.

But wait, this was TRUMP -- and the Russians were UNHAPPY, but how can THAT be? Didn't TP and BO tell us that the now evil Russians formerly of "the 1980's called and wanted their foreign policy back", but now morphed into evil even though they keep us in space -- were the GOOD guys in Syria? Why BO and John Kerry assured us those same Russians had removed ALL the chemical weapons from Syria!

Why, it is as if TP and it's media arm are themselves confused -- certain, but certainly wrong -- and thus the masses sitting in the stands for "Bread and Circuses" become confused. Who do they cheer, and who do they boo? They certainly  no longer can figure it out for themselves, they must be TOLD!

And so they bleat.