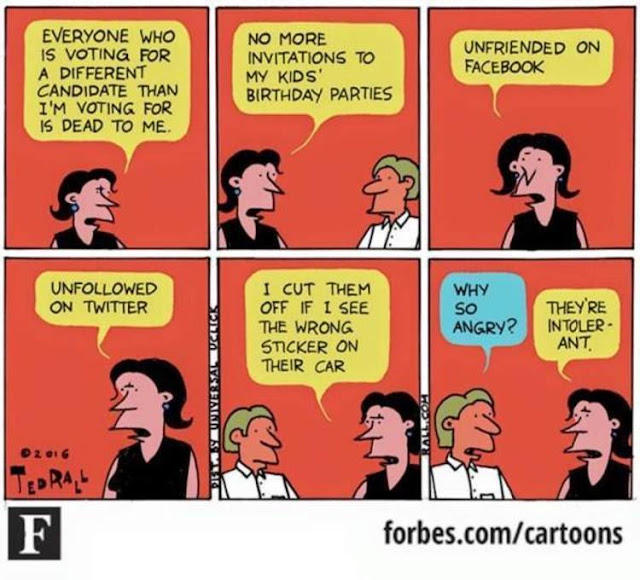 I spend a good deal of time ingesting media from the left and far left -- more than half of my media life, since knowing what those that I tend not to agree with are thinking is more difficult and less natural than listening to echoes of my own thought. I have a strong belief that spirit / thought / consciousness are what makes us uniqely and eternally human. To me, race, gender and sexuality are FAR less important. "Culture" is however critical, because everyone has one, and in the US, we now have two radically different cultures.

I find this quote from James Mattis from the top linked article to be spot on:


When I asked what worried him most in his new position, I expected him to say ISIS or Russia or the defense budget. Instead, he said, “The lack of political unity in America. The lack of a fundamental friendliness. It seems like an awful lot of people in America and around the world feel spiritually and personally alienated, whether it be from organized religion or from local community school districts or from their governments.”

Frequent readers of this blog understand that I consider meaning to be really the only thing that matters in human life -- and I regularly harp on "Man's Search for Meaning". I believe that the reason for the alienation in Western civilization is because we have put pleasure or "happiness" in the top position rather than meaning, so freedom has been corrupted to being "freedom to have as much pleasure as possible".


For a Christian, the realization of our ETERNAL purpose as serving Christ is the ongoing discovery of his eternal leading. As covered in Frankl, great suffering has far more meaning than even the most desireable pleasure in even the temporal sense, let alone the eternal.

Since personal pleasure has become the "holy grail" of the west, alienation is inevitable. Most people find it difficult to see "good" in people who do not share their world views. Christ's admonishion to love our enemies goes totally against our sinful human nature. When the highest goal is "happiness / pleasure", why bother to even associate with anyone who does not see eye to eye with us on virtually every detail?

When my own pleasure is the ultimate goal, then whatever gets in the way of that is clearly "evil". "Progressives" consider their chief recent accomplishments to be pursuit of largely sexual pleasure -- sex outside of marriage, abortion on demand, same sex relationships, gender bending, etc.  This is nothing new -- this script goes back to the Old Testament. Let's break out the golden calf and the ashera poles. In the search for pleasure. "Progress" is considered to be removal of restraint and ultimately all responsibility -- everything becomes "a right", including the "right" to not even be exposed to anyone who is not in lock step with your world view. (those people are intolerant!)

The "progressive" world view demands that those who do not agree be removed from any association with "progressives" -- the god of personal pleasure is CERTAINLY not in any way shape or form going to suggest that you "love your enemies",  but rather that you destroy your enemies -- cut them off by any means possible. Make no mistake, Christians are definitely the chief enemies of "progressives" in this world. Muslims are OK, but NOT Christians!

Tiny little things like a Constitution are not going to stand in the way of "progressives" rooting out Christian doctrine. Here is Bernie Sanders applying a religious test to someone nominated for office in BOistan. Bernie was especially offended by the nominee having written this line in an internet post:

“Muslims do not simply have a deficient theology. They do not know God because they have rejected Jesus Christ his Son, and they stand condemned.”


BOistan has no operative constitution, so at least half the country has no problem with this. Christ states in John 14:6 "... I am the way the truth and the life, no man cometh unto the Father, but by me". Practicing Christians not only agree with Christ, they WORSHIP him! Bernie concluded his remarks with; “This nominee is really not someone who this country is supposed to be about.”

America had a Constitution that demanded in Article VI:

The Senators and Representatives before mentioned, and the members of the several state legislatures, and all executive and judicial officers, both of the United States and of the several states, shall be bound by oath or affirmation, to support this Constitution; but no religious test shall ever be required as a qualification to any office or public trust under the United States.

BOistan clearly does not honor the laws of the former Democratic Republic of America ... to "progressives", what was fundamental to America is now "not what BOistan is about".

David French concludes the second linked article above (both are excellent, well worth reading) with this:

If we seek to preserve our union, we’re left with a choice — try to dominate or learn to tolerate? The effort to dominate is futile, and it will leave us with a permanently embittered population that grows increasingly punitive with each transition of presidential power. There is hope, however, in the quest to tolerate. Our Constitution is built to allow our citizens to govern themselves while protecting individual liberty and providing for the common defense. It’s built to withstand profound differences without asking citizens or states to surrender their strongest convictions. We can either rediscover this federalism, or we may ultimately take a third path — we may choose to separate.


Is it remotely possible that the left will relent and decide that using the federal government to dominate is "futile"? As the Deep State, dominant media, legal system and educational system pull out all stops to overturn the presidential election, it seems awfully pollyannaish to me. Is it REALLY "futile"? The left has forced abortion on demand in all 50 states as well as gay "marriage", and they are pushing hard on the "whatever" vs gender front. Their climate doctrine is holy writ, well beyond Biblical levels of inerrancy for even most of the leftist post Christian "christian" churches. The Virgin Birth? Probably not ... Climate Change? Yea verily! ... oh, and forget that John 14:6 stuff, Muslims, Wiccans, "whatever" ... "it's all good'.

What I'd LIKE to believe is that we will have an honest to goodness REVIVAL of actual practicing Christainity in this failed area of N America. There ARE hopeful signs ... a person I work with attended the graduation at Liberty University this spring -- around 100K students enrolled on campus and online. Huge growth, Christ centered, very much appreciated and supported the graduation speech by Trump. Have attended a couple services at RedRocksChurch in Denver with our son ... packed services, all ages, very Biblically based with a young adult focus. Rapidly growing.

In general, the "sliding leftward" traditional protestant churches are dying. The Evangelicals, and to some degree Catholics are growing. Interestingly, Trump DID win the Catholic vote -- which is a story that is not talked about much. As I wrote about here, I firmly believe that 2016 was our first truly "post Christian Nation" election. Practicing Christians finally realized that we no longer live in "America", which culturally WAS Christian, but now live in BOistan, which desires to be pagan, and is more than happy to exclude any practicing Christians if possible.

I agree with Mattis. While I very much enjoy the free exchange of ideas and relish the chance to debate matters of religion, politics, philosophy, scotch, and cigars, we increasingly live in the age of shrinking tribal alienation. ALL relationships are increasingly "my way or the highway" ... friends, family, work, neighborhood, church, etc. I personally work to maintain relationships with people who do not share my world view, but in order to do that, the relationships become increasingly shallow. The worst thing about the Climate Change religion is that it has made even something as innocuous as the weather a religious issue. There is no god but man (man is the measure of all things), and even the weather is due to man's power in the climate religion.

I've been away from my blog for a bit while becoming grandpa x 2 with the birth Graham Walden in Denver, and I've rambled yet again. I believe that increasingly fractured lives are the wages of losing a shared transcendent vision of meaning ... we will atomize to ever smaller "tribes" if we don't "revive". Is that a "decision", or is that "Grace"? Given free will, I see it as both -- there must be a daily decision to stay in the Grace or to reject it in favor of man's "thought of the day".

My prayer for my "enemies" on the left is that even if you can't imagine loving those whom you disagree with, is it really too much to ask that you tolerate them rather than seek to dominate them to the point of preventing even a tiny "trim" of the massive Adminstrative State which rules BOistan?

When elections are not honored, the "separation" at a minium seems all but certain. Perhaps that is God's will.
Posted by Bill at 12:03 PM