Why You Can't Trust A Socialist With A Gun | The Federalist Papers: 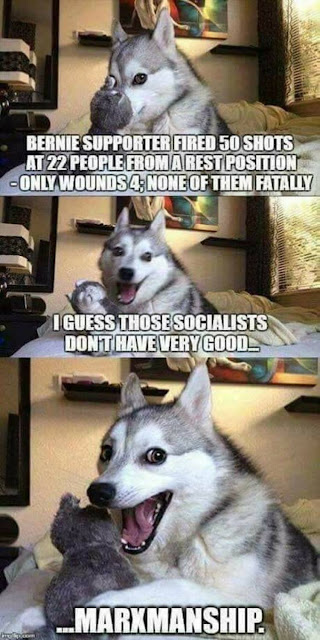 Thanks be to God! Squeeky Fromme, John Hinkley, and now Hodgkinson, the disease ... Hodgkinson takes a booby prize though ... 50 some rounds with a RIFLE! If Socialists were talented in anything, we'd all be speaking German ... or at least Russian for sure.

I've not heard the term "Assault Weapon" used even once in the meda this time! -- no calls for bans on these horrible weapons, basically NOTHING! Was the gun not black? Why do we not know the brand, capacity of the weapon, etc? It nearly HAD to be effectively an "Assault Weapon", since it was semi-auto with apparently a hi cap mag in order to get off as many rounds as he did.

I think we all know that the level of "outrage" in the media is low for a good reason -- "their side" did some shooting at someone they basically believe ought to be shot, though they can't say it directly. He kind of "deserves what he got" in their mind -- "mean policies", pro-gun, hell, he probably STILL will not vote for a ban on the very weapon that grieviously wounded him -- the very definition of "stupid and evil" as seen from the left.

As the article points out, there is no evidence at all of "mental illness" in the shooter, other than being a Bernie Sanders supporter. He had been in the area a month, he was on Facebook groups that talked of killing Republicans and he had a list of some he wanted dead.

You have to love a media and political party (but I repeat myself) that is pretty much unconcerned when you see hashtags like #HuntRepublicanCongressman AFTER the shooting. Imagine if the Democrats had .0001% of the level of concern that they would have over #HuntMuslimTerrorists for such a hashtag? Why, if such a concern even registered at all with "The Party" (TP-D), we might actually be on the road to some sort of "comity".

We are ALL driven by emotion, and we seek to protect our tribe unless we worship a higher power -- say one that makes the truely hard command that we love our enemies. (and all of us fall short of that goal even when we pray and try) Hodgkinson is one of "The Party" and he gunned down one of their enemies. They know they can't cheer, but they are unable to display much in the way of concern -- in their hearts, it is "what do Republicans expect? They are evil racist people trying to harm others, how can they be surprised when violence results?".

"The Chicago way" is the TP way ... punish your enemies and reward your friends. Until Jesus hung on the cross, that was the ONLY way -- that is human nature, and the very thought of "loving your enemies" is INHUMAN (as in divine) in the extreme. TP seeks to celebrate the "natural angels" ... lust, hate, fear, pride, anger, etc. and to deny the existence of Christ and "higher angles". The leadership of TP fully understands that when those bitter angels take over, the chaos demands authoritarian rule, and that is fine with them -- that is why they are fine with Islam as well. When you believe man must be ruled by an iron hand, it makes no difference if it is Stalin, Hitler, Mao, Ayatolla whatever, Kim Jong whatever, etc ... or Satan.

Either there is an ulimate authority and morality, or there is not. If there is not, then might makes right and power IS "morality". You agree, or you die ... #HuntTPdeniers would be an honest hashtag.