The Global Swamp Vs Trump, Whose Russians Are These?

A shady lawyer from a foreign power offers a political campaign potenentially treasonous dirt on the opposition candidate. There is PLENTY of evidence to suspect that such hard evidence might be avaiable -- 20% of the US Urainium reserves transferred to Russia in a pay for play $50 million dollar deal -- all that is needed is solid lock her up and throw away the key proof. Her husband with a totally known history of womanizing having visiited Russia, laughed with Putin on deals unknown -- not hard at all to imagine all sorts of documentation on blackmail known that could embarrass the assumed future madame president.

There is no question that any Democrat politician would check it out and nobody would even be concerned. Teddy Kennedy is documented to have tried to get the Russians to help Mondale in '84. Simple -- just threaten the US with war, it will be bad for Reagan! Nobody really cares.

Are we supposed to have forgotten Slick Willie and "Donor Maintainence" events in '96? As covered in this article:

Do they remember Chung — he was the one who in the pre-farecard era said the Clinton White House was like a subway because you had to put in a coin to open the gate — testified before the House of Representatives that the head of Chinese military intelligence told him: "We like your president very much. We hope to see him re-elected. I'll give you 300,000 U.S. dollars. You can give it to your president and the Democratic Party."

We could waste a lot of time on "facts", but why bother? Everyone that cared in the least knew that the White House was completely for sale in the Clinton years, and at least half the country cared not at all -- ho hum, it's our guy.

BOTH sides are against Trump and his supporters, here is National Review on the subject ...

My colleague Jonah Goldberg has given perhaps the best one-sentence advice for conservatives in these troubling times: “Trust nothing, defend nothing.” We don’t know the truth. We don’t know the extent of the Trump team’s misdeeds. We do, however, know enough to reject the administration’s spin. Donald Jr.’s meeting was, in fact, a “big deal,” and Americans who aren’t troubled are Americans who need to check whether their tribalism has trumped their good sense.

Were NR even remotely "conservative" or "small government" rather than just being ELITIST, they would be embarrassed, as every other real conservative / small government person is. ABSOLUTELY we don't want to trust NR, and why the hell would one defend them? The idea of politics is to have "your side win" -- obviously NR's "side" -- Hillary, failed to win, and they are still in a tiff.

Justice Gorsuch ALONE is such a huge accomplishment for Trump compared to what we would have got with Hillary that anyone remotely conservaitve is willing to do a lot of "defense". One doesn't have to "trust" anyone to defend your obvious self interest. 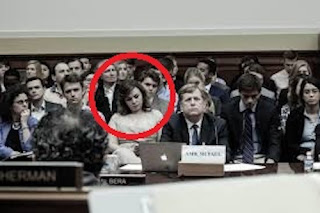 The other question  is "Whose Russians are these "???? There is "Natasha" circled with with "Boris" near her during a foreign affairs meeting in DC 8 days after Trump Tower. Both of these fine Russians were involved in  the "Trump Dossier" caper where the ex-British spook worked with Russians to "leak" a tawdry tale involving hookers urinating -- something a little hard to buy about germaphobe Trump. Orbis, and Fusion GPS were involved, and both Boris and Natasha have connections with Fusion GPS.

But never mind -- clearly "The Party" (TP-D), the Deep State and nearly all the media including erstwhile supposedly "conservative" outlets like NR hate Trump. He is not the status quo, and ALL those groups, which at this point it is clearly obvious also included the bulk of the Republican Party, have been riding the same gravy train, and they DON'T want it to stop! In fact, they are REALLY worried about what happens to them if it stops.

We could waste a lot more time here, but there is ONE LEADERSHIP really -- the elite. It encompasses TP, The Republican Party, media (largely "both sides" as the NR article shows), business, education, etc ... and then there is the anti-elite -- TRUMP. How was the whole "Trump Dossier" funded? This from here:

According to a Vanity Fair article, Fusion GPS was first funded by an anti-Trump Republican donor, but, after Trump’s nomination, Fusion and Steele were paid by Democratic donors whose identity remains secret. Writes Satter: “Perhaps the time has come to expand the investigation into Russia’s meddling to include Mrs. Clinton’s campaign as well.”

The elite are nothing if not "bi-partisan", it is ALL about THEM, and Democrat or Republican are labels they are happy to wear in the service of themselves. Is Trump any different? Who knows -- he may just be doing the bidding of the elite for his own gain as well -- however it certainly LOOKS like all sides are against him.

Does ANYONE anywhere think that ANY political campaign would refuse to LISTEN to potential dirt on the opposition candidate, no matter what the source? I can't believe that anyone including NR actually believes that -- they just feel that they have to STOP TRUMP, so they fake like this is somehow "unusual" or "wrong".

It's a GLOBAL swamp folks -- from Davos on down.

Email ThisBlogThis!Share to TwitterShare to FacebookShare to Pinterest
Labels: Trump