The Racial and Religious Paranoia of Trump's Poland Speech - The Atlantic:

I'll start out with two quotes from the linked article:

"The West is a racial and religious term. To be considered Western, a country must be largely Christian (preferably Protestant or Catholic) and largely white. "

This is the Atlantic, so naturally the conclusion is that Trump is a racist using religion to increase paranoia. If you want that view, go read the article.

First, what is "Western"? At one time we would have all agreed it was "Western Civilization" ... Judeao-Christian, Greek, Roman, Enlightenment, England followed by the US as leadership in it's latter centuries. Now? Well, we will get to that, but "the modern enlightened" ("liberal", "progressive", etc)  know they hate it. This is from this excellent article, "Yes They Really DO Despise Their Civilization".

I mean, really, how ignorant and provincial do you have to be, Messrs. Beinart and Bouie, to hear Trump’s speech and think of it as a #MAGA version of a Nuremberg Rally Address? Is the degree of self-hatred of the West required to be a virtuous, woke person such that you cannot tell the difference between Handel’s Hallelujah Chorus and the Horst Wessel Song? Do they really think Kenneth Clark’s Civilisation (all of which is available on YouTube, starting here) is a plummy version of Triumph of the Will? If standing against this kind of liberal insanity means I have to stand with Donald Trump, well, okay, I’ll stand with Donald Trump. I won’t like it, but at least Donald Trump doesn’t hate his own civilization.

So if you hate your own civilization,  where do you go? We need a cartoon reminder: 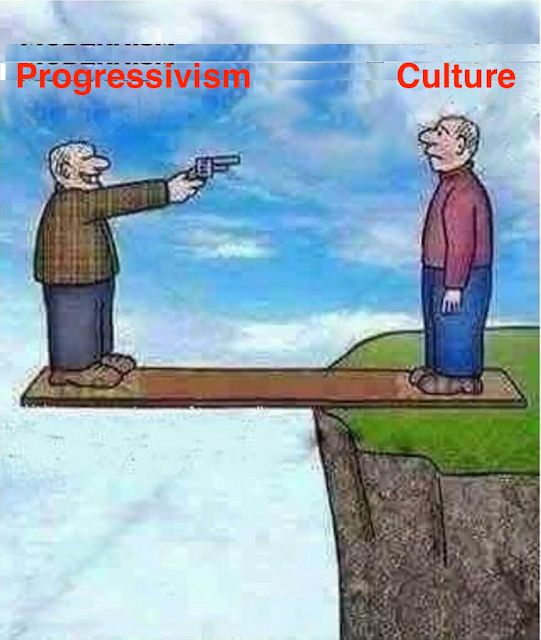 What "other civilization" are they after? One without Trump and his "supporters"? They make it pretty clear that it IS NOT "Western Civilization", because that is "Christian and white". So what is it? Islam? Marxism? Black Lives Matter? I suspect they would vaguely say it is "A new fully tolerant, equal, secure, well educated (with progressive education), environmentally friendly, gender free, priviledge free, moral judgement free, etc ... culture/civilization".

I've not really heard them say in any detail though, and certainly not with any discussion of "how" -- essentially, the message of the left continues to be "pull the trigger, we will figure something out on our descent into the abyss" ... trust us. The police are playing the role of Western Civilization, the Terminator is "progressivism" ... they don't tend to honor their "promises", and they have some BAD feelings about Western Civilization!

As the quoted paragraph says -- it is pretty damned easy to support Trump as opposed to people that hate their own civilization, and maybe worse, consider civilization to be their enemy, and VERY disposeable in  order to reach their goals.

The Trump Warsaw speech is WELL worth reading the whole thing -- here is my take on it (Hint, think Reagan at Brandenburg gate!)