How To Not Be Secular; Reading Charles Taylor, by James K A Smith

I often describe my pilgrimage as from a 1974 tiny rural HS, 1978 no name university BS graduate, culturally flat technical hick; to autodidact idiot savant psuedo-intellectual student of Western civilization, Christianity, Philosophy, Literature and Science hick, as a series of pitches going up a mountain on which I often THINK that I have seen the peak, but realize at various junctures that all I have seen are outcroppings, many of which involve yet another LONG pitch I must traverse to gain a glimpse of the next dizzying (to me) height. I've ceased to imagine it will be the peak -- that will be in the life to come.

This is a review of  Smiths sort of of extended cliff note narrative summary of Charles Taylor's 874 page mountain of a book, "The Secular Age" which I now have on order (don't expect the review blog anytime soon)! Here is a review of The Secular Age"  if you want a differnt / more extensive take on the larger work.

Smith says that Taylor "gives us an account of our cross-pressured situation -- suspended between the malaise of immanence and the memory of transcendence". Immanence meaning "matter and the physical is everything" and trancendence meaning this is not all there is -- there is a higher Platonic /  spiritual / metaphysical reality that is more real than what our imperfect senses can apprehend.

Taylor perceives and makes plain to us "that transcendence and imanence bleed into one another; that faith is pretty much unthinkable, but abandonment to the abyss is even more so;" ...

"Employing a kid of intellectual colonialism, new atheist cartographers rename entire regions of our experience and annex them to natural science and empirical explanation, flattening by disenchantment. (Graveyards of the gods are always highlights of this tour).

My favorite diagram from the book is this one -- I apologize for having to resort to taking a picture of it. 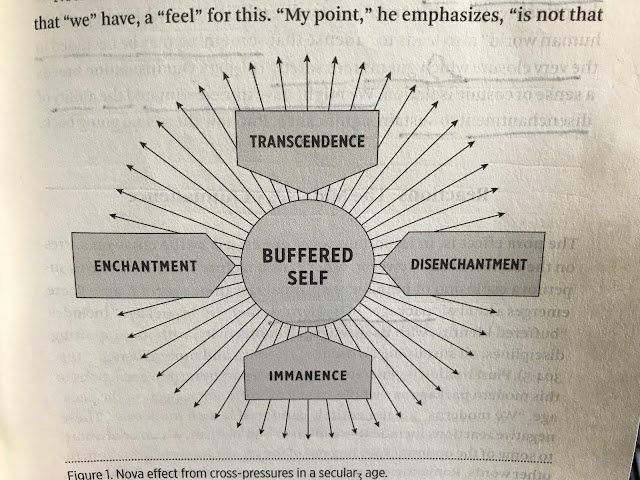 I think a reasonable attempt at tiny summary of the Smith book is that Taylor tells the story, AS A STORY, of how it became possible to exist in a disenchanted immanent world where the most importat thing is the Buffered Self -- meaning the self devoid of attachment to culture, history, religion, or even family. A detached self that is never the less haunted by being "pushed by the immenence of disenchantment on one side, but also pushed by a sense of significance and transcendence on another side, even if might be a lost transcendence".

We all live by a narrative -- the pure humanist narrative of "progress" is that we once lacked physical vs metaphysical explanations for what we saw around us, so we imagined "enchantment". Spirits and  gods were all around, but we were only children. The definition of "progress" or "maturity" is NO ILLUSIONS ... we live in a cold meaningless universe that is ONLY matter. Meaning IS matter ... man is the measuring creature, measurement is meaning. If it can't be measured, it is an illusion, and therefore does not exist!

"If one were to preserve God's sovereignty, one would have to do away with "essences", and with independent "natures". And the result is a metaphysical picture called "nominalism" where things are ONLY what they are named."

If you can name it and measure it, it exists. If not, it doesn't. So, with the Nietzschean "demise of God, we are the only authorizing agency left" ... these two paragraphs give the barest thumbnail of the "CWS", Closed World View -- it's matter and us, that is all the material available to try to construct meaning.

And so, the disenchanted immanent "meaning" constructed is the "Modern Moral Order" (MMO) -- it is pure humanism, bootstrapped from matter and human thought and ruthlessly applied to all as the most restrictive of ancient religious -- although of course with much different tenets:

"because of an inadequate appreciation for moral sources, modernity fixates or moral articulation -- a fixation on more and more scrupulous codes of behavior .... we don't know how to make people moral, but we do know how to specify rules, articulate expectation, lay down the law. This happens in policy, but also informally in cultural codes of political correctness ..."

What is lacking of course is any sense of inner motivation -- it is all external, we will yell at you if you fail to meet the ever growing MMO -- or maybe worse, we will pass more and more laws, you MUST NOT use plastic grocery bags, you MUST recycle! Thus saieth the MMO.

It becomes clear that the CWS / MMO / Buffered Self, etc ARE a form of metaphysic, and thus effectively a "religion" -- the self is not actually "buffered", unless can exist as an effective modern hermit of constant distraction, escape and self-delusion,  the Buffered Self  must BELIEVE that all of this is "the good", but part of the CWS itself is that it is a "good" completely made up of whole cloth.

Man STILL cannot live by breat alone, but must have a some sort of "social imaginary" (Taylor term), metaphysical dream, or every word that proceeds from the mouth of God.

So what exactly is the advantage of the certified manufactured illusion with ZERO parts transcendent content of the MMO, over thousands of years old moral order that at the minimum leave the thought of transcendence -- at least in the context of age, open to the psyche?

Well, in an immanent sense, of course NOTHING -- since there can't be anything that isn't made up by randomly developed creatures out of nothing except "stuff" (matter). Taylor -- and Smith believe that there actually aren't any honest humans that fail to sense the haunting of the transcendent. Is it real, or is it just side effect of some old cave man brain circuits that would be best excised in our modern world to allow us to be completely "grown up" as a Niezcheian disenchanted, immanent buffered self that deserves to be tamped down and unacknowledged -- even if it means they must lie about it to make it seem that the fiction of pure rational atheism exists.

Unsurprisingly, no answers are given. The task of the book is to make Christian faith POSSIBLE in our flattened, disenchanted meaningless world, essentially by just making it clear that EVERYONE has "faith", it is only a question of "faith in what". The secular owns the world intellectual playing field today -- Taylor sees us at the possible cusp of faith no longer being "allowable", although he does not predict that will be the actual outcome ... he believes that even the merest ghost of the transcendent cannot be ignored because "this heavy concentration of the atmosphere of immanence will intensify a sense of living in a "waste land" for subsequent generations, and young people will begin to explore beyond the boundaries ..."

Even for the subject Smith book of a mere 139 pages, I have but scratched the surface lightly. Yet again, I find myself regularly running to the Internet to bone up on my definitions in order to begin to understand what I am looking at. I feel as a non-english native speaker, who after a couple semesters of English is thrust into watching Shakespeare and asked to provide commentary. And this AFTER 100's of books over decades of my attempted intellectual improvement. I'm an intellectual slow out of shape fat man climbing into high country of knowledge.

In the 500 years since the Reformation, science, philosophy and religion has sold us the chimera of "reform / progress" with no concept of "to where"? It seems that in some circles the thought was "to a mature human vision of a morality built on facts rather than superstition" -- however, "morality" is more than a "set of rules", and "mature human vision" is a state of perpetual change "toward" an unknown objective rather than a "goal" ... and it likely is merely going in circles chasing it's tail.

We remain LOST so badly we often fail to even detect our lostness -- does my quest for knowledge lead me forward or into the abyss? My prayer is that with Christ holding my hand, there can be no truly uncharted abyss. I KNOW the TRUTH -- this mountain of human knowledge is only like some old guy attacking Everest alone without oxygen -- I know I'll die in the attempt, but I'll die anyway.
Posted by Bill at 12:50 PM