Some of you are aware that a week ago this past Friday, I was CERTAIN that I had took my two hearing aids out before going to bed at our Iowa cabin, and put them on our counter having forgotten  my little case back in Rochester, but being unconcerned since it was only my wife and I at the cabin with no pets.

In the AM, they were BOTH gone! For those of you with hearing aids, you realize this was an over $4k loss, so the relatively easy to search cabin was TORN APART with no result. Naturally, my recollection of having put the devices on the counter was universally questioned by all including me. When did I REALLY have them on last? Do I sleepwalk? Was I drinking? Do I commonly misplace and misrecollect like this?

Even though I had 100% clear recollection of almost going to bed, realizing the hearing aids were still in my ears, and then putting them next to my charging cell phone on the counter, the fact of their abscence in the AM was MUCH more clear!

Within the first couple of hours, the "mouse theory" developed, but was discounted given the questions of BOTH of them? Seriously? I'm NOT a statistician, but I'm pretty sure you can't calculate the probability of a given mouse taking a given hearing aid -- it is a "unique event". I'm also pretty sure that if said mouse takes one hearing aid, the odds of them taking the second are VASTLY higher.

I present the following evidence obtained from under the dishwasher at the cabin. 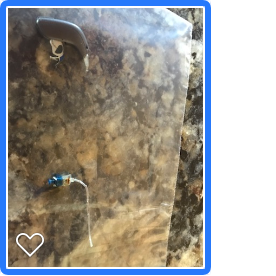 My contention is that moose senility may or may not be setting in, but this particular incident is not evidence for such a case.

For anyone else who has hearing aids or other small items show up "impossibly missing from where you put them", I would further submit that the mouse theory ought not be discounted out of hand! Especially among those of us "around 60", the loss of self confidence might even be worse than the loss of the money. I must say, I'm not nearly as worried about the other one turning up, nor if they can/will fix this one than I was of WHERE THE HELL DID I REALLY PUT THEM!

I certainly preach the value of humility -- can anyone be sure of anything in this world? I also now have a personal lesson in the terrible feeling of near total loss of confidence in oneself in at least one instance. Having some confidence in our recollections is definitely a blessing not to be squandered lightly!

** UPDATE ** 2nd hearing aid was discovered on TOP of dishwasher when it was finally pulled out.

Email ThisBlogThis!Share to TwitterShare to FacebookShare to Pinterest
Labels: life