If you would like to see where we watched it, follow this link. In the sandhills S of Alliance NE -- we avoided the crowds. We were going to watch it from York NE, the clouds looked bad, so we abandoned our friends and just headed west ... for a spell just outside of Ogallala NE, it appeard that we would be punished for our sin ... it actually got a bit worse than this picture! 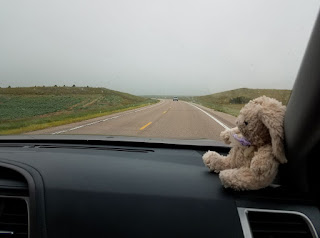 We found our spot, and we sat and watched the slow occlusion in bright sun, then we got some high clouds just before totality ... they broke for totality, and then it clouded right up. Whew!!

Here is my one 360 degree video -- I hesitate to include it because like so much of our modern world, it is FAKE -- the real experience is what is awesome, our reading, videos, movies, documentaries, "first person accounts", etc have more and more given many the idea that real experience isn't all that important. I'm starting to feel more and more like there actually isn't anything except real personal experience, with others, when at all possible.

The video underplays the darkness with the 360 degree "sunrise/sunset" effect. You can see that you are in a special spot of totality. It gives you a LITTLE of the feel that "things are not what they have always seemed". Go look at the best movies of the corona that you can find -- it is ALIVE, and the naket eye shows it in all it's majesty during a total eclipse. I had always assumed that the beautiful corona pictures were from special high resolution telescopes -- Nope! There it is in all it's mysterious glory. The mystery is that the surface of the sun is at about 6K degrees, but the the temperature increases very steeply to a few million degrees in the corona, in the region 500 kilometers above the surface,and we don't know why.


The other amazing thing is how light it is right up to that last "flash" as the sun totally disappears -- it looks like a super cloudy day, with a "weird filter", but not enough to really make you look up if you did not know what was going on..

As I write in my blog of "Spaceman",

"Experience vs Knowledge". Mike is orbiting at the Hubble spacewalking, looks around and EXPERIENCES the billiant light of the stationary sun as the earth rotates out of darkness ushering in a new 90 min Hubble "day". Mike EXPERIENCED the fact that the sun is stationary (relative to earth) and the day and night are caused by the rotation of the earth. Of course he "knew" that, but experience is much more. Telling someone about being a grandparent is not the same as being a grandparent.

You "know" what is going to happen, yet when it happens there is an emotional effect -- it "feels odd", how can this be? Even when you have been a space nut your whole life and watched men walk on the moon in rapt attention, there is something about the experience  of the moon blocking the sun that you sense is rare, and it is an honor from a greater source to be able to experience it.

As a believer in divine creation, an eclipse is especially poignient, as it feels like a direct message from God ... "As you grow in knowledge of my creation, you are able to discern my joy in creating the moon 400 times smaller than the sun, yet having the sun 400 times farther away so that at special times because of the eliptical orbit of of the moon, and the tilt of the earth, you may see my hand of creation as the sun is blocked perfectly. I give you these signs so that you may know that I am God".

Alas, for many today it is but one more random phenomenon in a cold and random universe that is so far beyond exceedingly unlikley that the fact of an eclipse would add a few exponents to the number of required universes were the God deniers to consider the ramifications of not only there being a universe that can sustain life at all, but one in which intelligent life arises -- nay, even CONSCIOUS intelligent life that can survey it's place in the universe AND, just happens to live on a planet that experiences perfect total eclipses ... where the sun is EXACTLY blocked, making it's corona visible!

One "explanation" is what Elon Musk believes ... we are in a "simulation" a sort of "Grand Matrix movie".  This explanation is really no "explanation", since it just makes "god" to be whomever programmed the simulation. According to modern physics, there ISN'T any explanation -- it's pure randomness all the way down, so there "must be" something like 10 to the 400th UNIVERSES in order for the extreme unlikelyness of our existence to happen.

To accept 10 to the 400th universes or "being a simulation" is considered intelligent and rational in these times -- God is however something that only the most backward and out of touch with reality believe in.

I pray that others may feel a little "sense of small" as I did in their observations of the eclipse. Our greatest shared loss, and with it, our ability to see our fellow man as similarly tiny short lived entities in a vast and timeless cosmos, is our sense of small. It isn't just our elites that have lost it or at least heavily distracted ourselves from it. Nobody with any sense of their smallness in the universe would waste their time tearing down statues of any sort if they were part of a very small and temporal humankind. Even all of human history is such a tiny blip in time that we barely have any history at all ... let alone any to tear down.

As it has been since Adam and Eve, the human sin that exceeds all others is PRIDE. for me, the eclipse was a visceral experience in being very small and very finite in the face of God and eternity.

Thanks be to God for allowing me to witness this example of his greatness.
Posted by Bill at 5:01 PM