An excellent SHORT article on the failed decades long "negotiation" with NK -- the money paragraph.


But here’s the thing: If you go into negotiations with an enemy who sees negotiations as nothing more than a stalling tactic (or shakedown operation) in its pursuit of a goal, then you have to decide how far you’ll take negotiations.

Assuming that all the "intelligence" is true (and I'm forever skeptical of that) and NK does actually not only have a nuke, but a minaturized one they can put in a warhead, then negotiations have clearly failed.

The form of the decision seems very easy:

We have highly paid people that have been thinking a really long time about I assume ALL the options ... although Republicans claiming they were going repeal BOcare for 7 years and not having an agreed to plan doesn't really give one that much confidence.

The saddest part about "success" is that much like I found at IBM, until things REALLY blow up -- and by that I certainly DON'T mean you start bleeding revenue, market share, people, relevance, etc; talk often really IS believed to be a subsitute for action. No, it takes something MUCH more immediate than that ... like a nuke in the face for a country, or bankruptcy / being purchased for a company. We humans are much more prone to talk smart than act smart.

I suspect the most likely near term outcome here is the "bluster and hope" from both sides. Longer term?

Well, "someday" I believe that somebody is going to use nukes again. We live in a world of Comunism having killed over 100 million in the 20th century, abortion killing 60 million in the US since '73, Hitler killing 6 million, Pol Pot 3ish. It is an extensive litany that just goes on all the time ... "ethnic cleansing, genocide, jihad, ..." killing and "unthinkable" are not really terms that are related in the human mind. Pretty much any sort of killing is VERY thinkable, and historically, always doable as well. The Kim Jong line seems like a likely candidate to take the "unthinkable" out of our lexicon relative to nukes.

This cartoon covers my views on the press and much of the left in the US ... Trump is their enemy, they recognize no other. , if nuclear war is a negative for Trump, it has gotta be good! 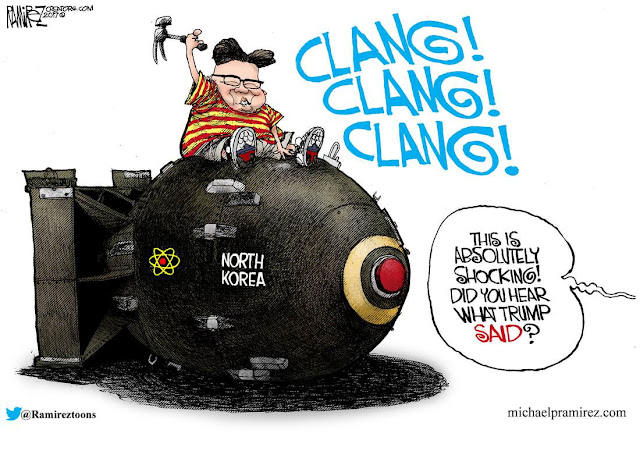 Can a nation struggling with gigantic issues like which bathroom to use take ANYTHING, including nuclear war, seriously? Count me skeptical.

If I was Trump? I'd go on TV and do a very short speech that went something like this ....

"We have looked at the options remaining relative to NK and have decided that there are no options that are likely less costly than living with a nuclear NK. That is extrodinarily regrettable, but it is the direct result of failure to act for decades across many administrations.

If NK launches missiles toward destinations that are protected with ABMs, we will do our best to shoot them down. If we succeed, if we fail, or if a nuke is used against an unprotected target, NK will cease to exist. We will do our best to choose a time where wind currents minimze effects to other populations in the area, including giving advance warning and evacuation of areas close to NK.

I have instructed the State Department to establish plans with all nations in close proximity with NK. I very much regret that this is the only option remaining. Let us resolve to never allow good intentions to bring us to this perilous juncture again. "

What will Trump choose? I have no idea -- but I sleep well at night secure in the knowledge that I *MUCH* prefer having him and his cabinet in charge than I would if Hillary was working on how to best build Clinton Fund cash and arrange for Chelsea to succeed her. We had BO for 8 years, and this is only one of the horrors  it brought us.