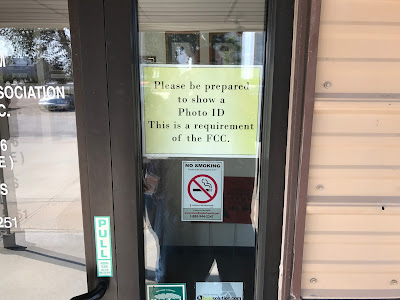 I only included links to two articles assuring us that requiring IDs to vote is RACIST!, but there are hundreds more, plus I've had it explained to me like 100 times on NPR.

According to the dominant media in this country the racism of requiring IDs to vote is a FACT -- at least as proven as Anthropogenic Global Warming (AGW ... human caused).

So assuming that blacks are unable to acquire IDs in sufficient numbers for this to be an issue, then that MUST also mean that blacks are unfairly excluded from obtaining internet by an FCC rule. It isn't just the internet ... they can't ship UPS packages, get on planes, check into many hotels, use a credit card in many places, or a host of other things. It is enough to make one believe that there truly IS "white privilege" in this nation, and blacks are unable to get an ID, thus being excluded from a huge part of life in America!

Assuming this is the case as we are assured it is, we can only assume that righting this wrong and helping this vast number of blacks to get an ID is no doubt one of the top priorities of many "progressive" organizations in the US. Could you name one?

I did some searches ... I came up with"Vote Riders", an organization ONLY focused on getting IDs for voters in states that require them. Otherwise it appears that nobody cares.

How can this be? If there are a large number of blacks without IDs, this is a national tragedy, and it can be easily remedied by getting them IDs. Perhaps a study on what strange cultural phenomenon it is that causes them to have such difficulty in obtaining basic documents allowing them to live their lives in the modern world is in order.

If we do not believe this, then we are being asked by the dominant media and political party to believe and repeat the lie that having an ID to vote is "racist". Blacks would therefore be capable of getting IDs, and in fact would HAVE IDs, and the voter ID issue would be a fabrication.

A quick look at Wikipedia shows us that Canada, Mexico, and a good deal of the world require ID to vote. I especially like the Swiss options ...

Switzerland
In Swiss cantons (i.e. the subnational political level in Switzerland) that still use the Landsgemeinde or cantonal assembly; Historically, or in Appenzell until the admission of women, the only proof of citizenship necessary for men to enter the voting area was to show their ceremonial sword or Swiss military sidearm (bayonet); this gave proof that you were a freeman allowed to bear arms and to vote. Women, and men who choose to do so, may show their voting card instead.[13]

So our dominant media and party is saying that all these other countries are racist, or are they simply lying to us?

I think we all know the answer -- for the left, consistency is NOT an issue! Political expediency and power is all that counts, and they are assured that the preponderance of voter fraud is on their side, therefore, they are neither going to try to reduce it, or do anything to figure out how large it is! IT IS IN THEIR FAVOR, and that is really all that counts!

Their position is completely non-factual, and the fact that they are effectively calling most of the other developed countries on the planet "racist" is beside the point. They are certain that they are gaining SOME percentage of fraudulent votes, and it MAY be large ... without IDs, it is pretty much impossible to determine, which is fine by them The result is IN THEIR FAVOR ... and that ultimately is all that matters to a Democrat.
Posted by Bill at 9:21 PM