As I mowed the lawn this afternoon, the Billy Joel tune kept running through my mind. I was purposely doing something useful rather than even bother checking on any of the teams in that league where the players kneel for what used to be the national anthem of a great nation, yet stand for the anthem of the most imperialistic nation in the history of the world. The BOistani's are just not that into history, and BOistan needs to get a national anthem that it's historically illiterate people respect.

(BTW, I have HUGE respect for the history of England, I just know it makes America seem like a pansy in the lording it over people of color category).

My pick right off would be this for the BOistan anthem:

When personal appetite is god, why not? I just hope there is a divorce and Iowa gets to be part of "America" (AGAIN!)! I strongly suspect that BOistan is headed for a divorce as opposed to a war ... Northeast and West Coast go to BOistan, middle gets to keep the old flag and national anthem from America, obviously BOistanis don't want it.

We don't agree on anything anymore, so why not just part ways? Illinois is bankrupt anyway ... just send the Chicago population to the coastal hell hole of their choice and bulldoze Chi-town. Once the festering boil of Chicago is gone, IL fits right into God's Country.

#rodgerstickethunt In GB we have a street named after the man who wrote the Bill Of Rights. On… https://www.instagram.com/p/BZbSPiDF7x5/

My response was going to be "Your Bill Of Rights comments would have more weight if you could beat the Bengals" ... no matter, I have too many feeds to get them all shut off instantly. Too bad they won.

Politics corrupts EVERYTHING, and so it had to be with sport. Will I ever watch a game again? Oh, probably ... at a social event. I've never been the kind that shoots myself in the foot to make a point. My football interest was already waning given the whole Kapernick deal from last year, today just showed me how screwed up it really is. No more illusions, the TV cord has been cut here since spring and it will stay cut.

A bunch of multi-multi millionaire players and billionaire owners making "statements" by taking a knee for the flag and national anthem of what used to be a great country. Super. Certainly they "have a right", and I have a right to ignore them as much as possible.

A friend forwarded the following link to NFL arrest statistics ... the page helpfully points out that the rate is "lower than the general US rate". Most likely true ... I wonder how that would work out "income adjusted"?

Which brings me to FB.

I used to cross post my blog, but felt that it was too much "in your face" for people that didn't care about what I thought about things ... some people have trouble not clicking, and just ignoring it even if they click.  FB was more for pictures of kids, grandkids, saying happy birthday, health updates / requests for prayers, trip pics, pets, etc.

Much like football, I'm not going all holier than thou and "leaving FB", I'm just resolving to not bother to check it much. I'm not going to waste the time to try to get my feeds fixed so I don't see a bunch of crap that I no longer care about, and I'm certainly not going to try to "unfriend" or "hide" all the folks that I'm never going to remotely agree with on hardly anything except hoping they have a happy birthday, they and theirs are happy, healthy and hopefully in God's grace for as long as they stay in this vale of tears.

SO, if I miss your birthday, anniversary, or fail to "like" something that you expected me to, it is NOT "personal", it is just that the signal to noise on FB has just slipped over into the "time waster" category WAY too far ... send me a personal message. I'll nearly certainly see that since I run messenger!

AND, if you want to keep track of me, have my blog e-mailed, it is REALLY is easy! Near the top of the Blog, SEE RED ARROW! 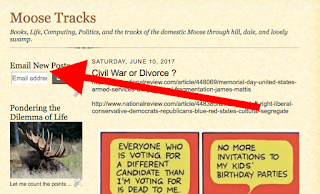