We may well find that this shooting is just like what we are being told -- "lone wolf", no religious association and no political association ... the guy just "whacked out".

However, apparently he is quite wealthy, checked in on the 28th and did a LOT of prep including getting a whole bunch of ammo and 8-10 guns up to the 32nd floor. Metal detectors are pretty common in Vegas Hotels these days ... clearly either this hotel didn't have them, or the guy got around them somehow. Possibly because he was a "high roller"?

This is damned peculiar ...

It seems odd to me that the MSM would IMMEDIATELY jump to telling us NO religious or political affiliation. I mean, the guy is WHITE, fairly wealthy, lives in Nevada ... the assumption would be that he likely voted Republican, which as we know would make TRUMP responsibile for the shooting! It is standard for any white male to be suspected of being a Republican, and therefore clearly guilty of a "hate crime" until proven not to be an R beyond a shadow of a doubt. (See Gabby Giffords and a bunch of other shootings) 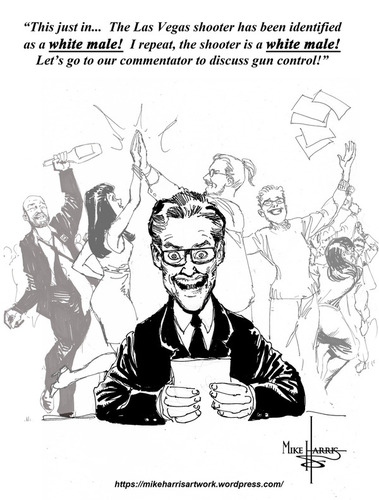 But not in this case. Also, while if he is just "whacked out", then certainly a Country Music crowd is as good as any other crowd, however if he has any sort of "motive" beyond crazy, then as the CBS Legal Exec helpfully pointed out, a lot of Country Music fans voted for Trump ... so they are kind of like unborn babies in the eyes of the left, and really have no right to life.

Crowds aren't exactly rare in Vegas ... if you can check in on the 28th and go berserk on the 1st, it seems like you have A LITTLE ability to select your targets.

So to just take a very tiny tour out into black helicopter land ... Oh OOOPS! The video that I linked to has been taken down -- no need to have you make up your own mind if it is the shooter! Snopes decided it "probably isn't", so in this case, that is good enough!

I'm guessing that the Deep State isn't going to be very excited about proving that the shooter was a Pussy Hat wearing Trump hater, so we likely will never know -- it seems clear that the MSM is highly UNinterested in finding a motive for this one!

Isn't it wonderful that we live in a country where a CBS Chief Counsel honestly feels that Trump voters should be butchered in cold blood while taking in a concert? REMEMBER, those are the GOOD people! See Trump and his voters are HATERS ... and deploreables, etc. I worked with a lot of lawyers at IBM ... they didn't like to say ANYTHING in writing, and even then it had "Attorney Client Privlege" stamped all over it!

BOistan is just not that nice a place.