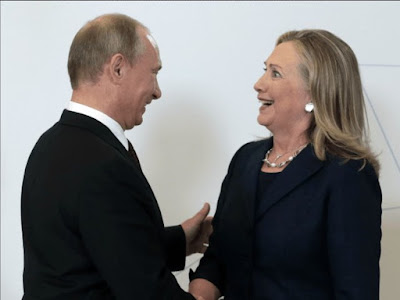 I've covered the fact that tens of millions of dollars flowed to "The Clinton Fund -- Funds, for Clintons" so that Russia could abscond with 20% of our urainium resources -- the "Urainium One" deal itself is a matter of public record. The documentation of the bribery and kickbacks as well as documentation of the BO DOJ turning a blind eye is what is covered in the linked column and in the articles from "The Hill", a middle of the road political publication.

The congress and the president need to PROSECUTE Crooked Hillary -- if not Slick and BO as well.

Yes, the Deep State, including all the lifer bureaucrats at DOJ, FBI, CIA, commerce, state, etc, etc will do all they can to save "their people" the Clintons, etc, and it may well not be possible to get Hillary in prison and some sense of justice returning to BOistan, but it should be attempted.

BOistan is a VERY corrupt place -- certainly the vast majority of the Republican party is just as in on it and corrupt as "The Party" (TP-D). As least Trump will tweet out the truth -- it remains to be seen how many will take the time to understand just how high level and well documented the corruption really is. The media will be doing everything they can to suppress this.