Well, it was only 3, and a US Ambassador, but fortunately US Ambassadors being murdered is fairly rare. It's a special shame when it is "due to a video".


We had a couple of speeches last week that the two major tribes in BOistan had different reactions to (suprise) ... first, General John Kelly's shock at the politicization of a call to a widow of a fallen special forces soldier, then W on restoring a true Davos control of this lawless territory now known as BOistan.

Here is the text of Kelly's speech if you want to look at it, it is well worth watching and or reading. It reminds us of what it was to live in a great nation rather than a tribal failure. "When there is nothing in our country anymore that seems to suggest that selfless service is ... appropriate ..."

Who are these young men and women? They are the best 1 percent this country produces. Most of you, as Americans, don't know them. Many of you don't know anyone who knows any one of them. But they are the very best this country produces, and they volunteer to protect our country when there's nothing in our country anymore that seems to suggest that selfless service to the nation is not only appropriate, but required. But that's all right.

As I've said many times, there is nothing left in BOistan that is held sacred by a large majority of people. A Matt Walsh column covers that in some detail.

A land made of ideals? What ideals? Tell me exactly which ideals unite and define the United States in 2017? I don't want to hear about what ideals united us in 1776 or 1890 or during WW2. Those days are gone. Tell me about today. This moment. Give me one ideal — just one — that can be said to unite nearly all Americans right now. After all, if we are a country made of ideals, yet we share no common ideals, then we are not really a country. Remove the bricks from a house made of bricks and you're left with rubble. Remove the essence from something and you end up with nothing. So, what are our bricks? What is our essence?

Readers of this blog know that the US was a nation based on ideas rather than territory, race, religion or ethnicity. We all know that we now can't name ONE value/ideal that is shared by a large majority of what used to be "Americans", but I now refer to as BOistanis, since we have NOTHING that is held in common -- not even honoring the old flag and anthem of the historical "America".

Here are some words from Kelly on that topic.

It stuns me that a member of Congress would have listened in on that conversation. Absolutely stuns me. And I thought at least that was sacred. You know, when I was a kid growing up, a lot of things were sacred in our country. Women were sacred, looked upon with great honor. That's obviously not the case anymore as we see from recent cases. Life -- the dignity of life -- is sacred. That's gone. Religion, that seems to be gone as well.
Gold Star families, I think that left in the convention over the summer. But I just thought -- the selfless devotion that brings a man or woman to die on the battlefield, I just thought that that might be sacred.

No John, nothing is sacred in BOistan ... 60 million murdered in their mothers wombs give a mute testimony so loud as to drown out any tiny sense of life even being "important".

Jonah Goldberg has a rather fanciful, but somewhat useful take on the two speeches.


But it seems like almost everybody is only hearing what they want to hear. Liberals, the media, and — importantly — President Trump’s Amen Corner all heard the same thing in Bush’s remarks: “Blah, blah, blah, blah, Trump Bad.” That’s why Bush is suddenly benefitting from a strange new respect from liberals and a strange new hatred from former supporters.

Yes Jonah, everyone -- including you and me, is hearing everything through the lens of our bias. That has always been, and is always the case, thus the reason WHY it was important to have SHARED values, and  a TRANSCENDENT view where we could at least attempt to rise above our biases to a set of sacred principles that would allow us to have a SHARED, non-tribal view, of what it meant to all be citizens of a nation founded on values / ideas / ideals.

But Jonah, we NO LONGER LIVE THERE, and I believe that is the essence of why you failed to see why it was CRITICAL that Hillary not be elected, even if it meant electing Trump!

If you want to read the entire W speech, I have included it here. Jonah aside, it does seem rather ironic to see the left praising W -- until Trump, there was nobody they enjoyed dismissing as a complete idiot than more than W. All it takes to be redeemed in the eyes the left is if one takes on Trump! I found this paragraph interesting ...

In all these ways, we need to recall and recover our own identity. Americans have a great advantage: To renew our country, we only need to remember our values.

W and his speech writers try valiantly to arrive and some "values" that might be of interest to some people -- obviously, the ones the left agrees with are "fight Trump"! Those damned Russians! Get globalism running again! More money for Davos!

W was a decent guy, a Christian even. He was and is total inside the beltway DC establishment through and through -- a man for bigger government, just maybe a TINY percentage less bigger than "The Party" wants. Obviously he hates Trump -- Trump beat his whiny little brother Jebbie, it is easy to understand why that made W werry werry angry!  8 years of BO shredding the Constitution and losing Iraq that America paid for with blood and treasure? Not a peep out of W. I think we know Davos / beltway / line the establishements pockets when we see it. 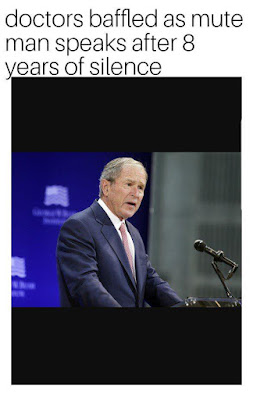 None of these reasons are however "shared values" -- a return to open borders and more globalism no doubt is a "value" that makes W, TP and our elites hearts go pitter pat, but it isn't exactly "America" -- it is a strong cry for a total return to BOistan without any boat rocking about some "return to greatness". W, he of "kinder and gentler", was forced to execute a "War On Terror" rather than the real war on Islamic Fundamentalism -- which considers establishment of a global Caliphate as a religious duty. It was the only kind of "war" that Davos would sign off on.

Everyone working hard so that the richest 8 guys on the planet that have overy half the total wealth on the planet can meet in Davos once a year is the "core value" that W, Flake, Corker, McCain, and the entire MSM / Democrat party are actually espousing as they attack Trump. They all know where the real power is (Davos), and they want their cut -- they REALLY don't want to see that threatened in any way, least of all by Trump!

You know my view -- either we return to Christ, or we continue to decline as a the failed tribal state of BOistan with no agreement at all of what "values" it might be that underly our whims, or the very clever marketing of our elites. I think the Kelly speech does a great job of pointing out just how far we have fallen, and the W speech does a great job of pointing out that the establishment of both political parties LOVES our fallen state as long as it enriches them!

I know this has gotten too long, I'd like you to consider "Six Seconds To Live" before you turn away and return to marianating in the MSM / cultural value free marketing designed to make you an amoral slave of Davos. We used to be a truly great nation! Those few of us that are left, the TRUE RESISTANCE -- need to remember and spread the memory of what was once America!

For about two seconds more, the recording shows the Marines’ weapons firing nonstop, the truck’s windshield exploding into shards of glass as their rounds take it apart and tore in to the body of the son-of-a-bitch who is trying to get past them to kill their brothers—American and Iraqi—bedded down in the barracks totally unaware of the fact that their lives at that moment depended entirely on two Marines standing their ground. If they had been aware, they would have known they were safe, because two Marines stood between them and a crazed suicide bomber. The recording shows the truck careening to a stop immediately in front of the two Marines. In all of the instantaneous violence Yale and Haerter never hesitated. By all reports and by the recording, they never stepped back. They never even started to step aside. They never even shifted their weight. With their feet spread shoulder width apart, they leaned into the danger, firing as fast as they could work their weapons. They had only one second left to live.