The Russians, The Party, BOistan 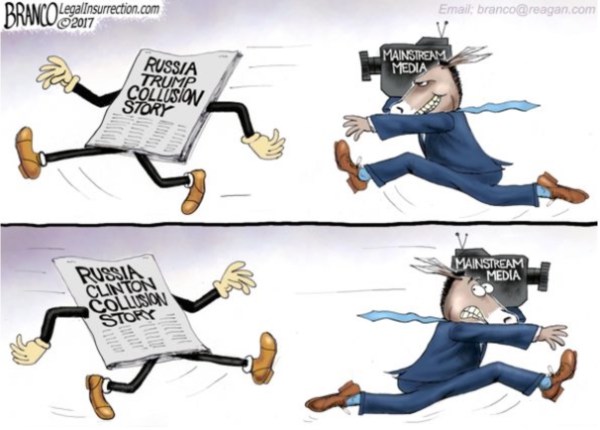 There is a good deal of reading in those links, the bottom line is a sad one that we now have a bunch more proof for. "The Party" (TP-D) has been colluding with the "Russians" since WAY back ... even when they were the USSR.

The second link does a good job of some summary ...

As the second link closes with ...

America is facing an existential crisis, one where it appears the same institutions designed to provide law and order and national security are guilty of wholesale corruption — and possible treason. Either the Trump administration will root out the rot, or the electorate will be faced with the undeniable reality we live in a nation where “justice” consists of one set of laws for the rich and powerful, and another for everyone else. A nation where Congress conducts toothless hearings, those who should be investigated conduct the investigations, and utterly corrupt media censoranything inimical to their own interests and those of their ideological allies.


Absolutely no one can justify the sale of the main ingredient used in nuclear weapons to the Russians. Either the swamp gets drained — or the entire nation drowns in it.


Readers of this blog know this already -- 2016 was the Flight 93 Election, wether or not Trump can turn us back from BOistan is highly in doubt. The "double standard" is really TP vs non-TP. It wasn't that Weinstein was wealthy and powerful, Bill Cosby was that at one point too -- it was that although Harvey was safe as long as TP controlled ALL the levers --- Hillary Lost.

We live in such a corrupt tribal state that news that the DNC / Clintons funded the "Dossier" that kicked off the Special Counsel attacking Trump is not front page blaring headline news like Watergate, Iran Contra, or what Scooter Libby did or did not know about a "covert" CIA operative named Valerie Plame who drove into Langley every day and had her husband write Op Eds for major news outlets to maintain her "deep cover".

This ought to be flashing along the bottom of every screen on every network in BOistan!

Tom Perez, the current chairman of the Democratic National Committee wants it to be known that the DNC’s “new [post-election] leadership” (Perez and Minnesota’s own fast-talking hustler Keith Ellison) know nothing. They all sound like Mafia types. Nobody knows anything.

NOTE, the Washington F*ing Post is reporting this! The DNC has ADMITTED IT!

In the last two weeks we have found smoking guns proving that the Clinton Fund and the BO administration knowingly sold 20% of our urainium reserves to Russia for bribes and kickbacks, AND the DNC has ADMITTED that they colluded with the Russians to smear Trump!

Oh, and as a bonus, we now know for certain the IRS in fact targeted conservative groups for political reasons under BO.  That was always obvious to anyone that was awake though -- and the sleepers are not going to be concerned about it anyway. As long as they get their "free stuff" or stay on the Administrative State gravy train, why in the world would they care if the Administrative State is a weapon against those that disagree with it politically?


But never mind -- nobody cares in BOistan. We are through the looking glass, down the rabbit hole and LOST IN SPACE! 90% of the public just knows what their tribe is, and "justice" is when their side wins!

We have indicted Manafort for "lying to the FBI and money laundering"? SERIOUSLY? We all know the Clinton Fund (Funds for Clintons) was a direct shakedown operation that amoung other things took 10's of millions DIRECTLY from Russian sources. How about being endicted for not even bothering to TRY to launder your bribes?

Here is Hillary lying under oath 3 times -- I'm sure that if we did a family compilation, we could find at least 10s of examples ... "I never had sex with that woman ..."

BOTH sides either follow the law or THERE IS NO LAW! Which is one of the mottos of BOistan.