The Tragedy of Fake News

With my birthday being yesterday I have broken my Facebook hiatus for a couple days to honor all the birthday wishes and respond. It didn't take long for a FB tragedy to roll by, someone I am friends with on FB who was a Trump voter, moderately conservative to libertarian, gave up on Trump on the basis of this! 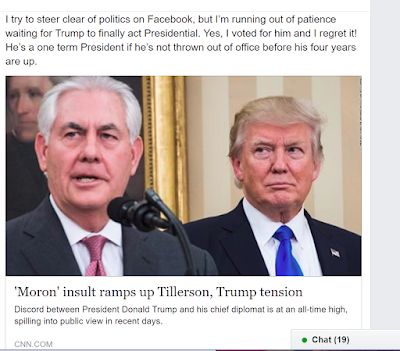 Naturally, the article was from CNN.

As "The Hill" article linked above covers in detail, Trump is absolutely right, this is COMPLETELY Fake News. It is created by the media finding "unnamed sources", 3 in this case, to state "off the record" that they heard Tillerson call Trump a "moron". THAT is "the news" here ... everything else is the result of that "news"!  (I suggest THIS policy on "anonymous sources") Any gyration about "how mad Trump is", Tillerson wanting to resign, EVERYTHING! It is totally Fake News with no other objective than to continue to make Trump and his administration look as bad as they possibly can 24x7 until they can either get him out of office or defeat him.

As Tillerson said, what anyone that is able must do is stick to reality ... including the reality I just stated.

When asked if he called the president a "moron" (and there's a reason that word is being kept in quotes, but more on that in a moment), Tillerson replied he wouldn't respond to petty stuff like that because the allegation and language is only meant to divide.

Why is our nation divided? Well, beyond the fact that we have lost God and therefore lost the idea of the sacred ... including our Constitution,  the ideas we were founded on, our founders, etc, it is the constant bombardment of partisan Fake News. Until '87 when Reagan allowed the right to fire back, it was 100% from the left ... now it is only 80% from the left. Which naturally the left finds to be VERY "unfair".

So in the Fake News world, when they make something up and put it out as "fact", a failure to deny is a sworn statement of the veracity of the charge. For those of you not offended by crassness of the sort that you wish didn't exist, but know does, I suggest you take a look at THIS ... LBJ on the subject of "getting someone to deny" ... the link is to a Democrat site that for some reason thinks the left has forgotten the "make something up, state it as fact, force them to deny it" ... or perhaps the modern left is pining away for something more "Johnsonian".

As the article put it:

For starters, we're fully expected to believe as fact that Rex Tillerson, one of the more guarded public figures around, called the president an "f-ing moron" or "moron" in public within earshot of the three sources NBC has.

We're also expected to believe as fact that all three of these nameless people kept this to themselves for almost three months before running to NBC with the story.

Tillerson, by saying the alleged comment was too petty to even address, is actually confessing to saying it. Or so we're told ...

One would think there would be no way that Trump could have even gotten elected, but the vast majority of his voters have completely turned off the 80% MSM. Facebook  and other sources increasingly become "amen corners" for the political views of the individual -- people that espouse the "wrong views" are unfriended, hidden, filtered, etc ... so eventually, everything they see supports their own views. They live in their own world where all agree ... and family events become minefields.

Some, such as myself, desire to see both sides, crave it even,  -- and have a VERY hard time not commenting when obvious MSM mind control such as this unfolds. Yes, I fully realize that my average sized finger in the dike of disaster is not going to fix anything, however as Burke said ... "when good men remain silent".

The part I realize today is that totally turning off FB for days at a time means that things like Birthdays,  grandkid pictures, etc go away as well. So, I'll adjust ... I did say that my leaving FB was a "liberal leave" ... can't we have our cake and eat it too? Would it not be better if it was free? Better yet, perhaps someone could pay me to eat my never ending supply of cake, and it would not make me fat.

Let's make a law! Perhaps we could have a team of "unbiased experts" filter all our feeds so we ONLY saw "factual truth"! We could call it "The Ministry of Truth" (or "The Fairness Doctrine")  ;-(