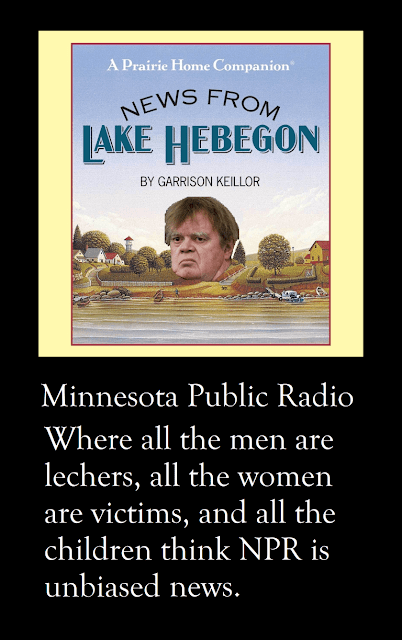 The human tendency for anyone but a hard lefty is to look at guys like Franken and Keillor and be flooded with schadenfreude -- these are guys that have attacked anyone remotely conservative with the darkest venom they could muster with never a thought of mercy. They were SMUG in capital letters,  and that was that. They were on the "right" (meaning left) side of history, goodness, intelligence, wealth, power, privilege, etc, etc  ... absolutely qualified to put down ANYONE -- as Franken does my Lord Jesus here.  Hey, it's "humor"! Add into that the general tone of the callers to an MPR show this AM -- "I'm SHOCKED that you would not stand by good men like Garrison, while TRUMP get's off! I'm done with MPR, you will never see another dime!" In the tribal state of BOistan, we love our own and ONLY our own!

The odd thing is that if Garrson is telling the truth -- and no matter how far left and smug one is, that is always a possibility, then he is out because he put his hand on a woman's exposed back and apologized. AFAIK, that is all that is widely known at this point -- I can't really blame his left wing defenders to be losing an "icon" over a hand on a back.

Do I "believe him"? Well, no, the fact that MPR would "sever all ties" with a man that has been THE face of MPR since I've been able to listen, means to me that we are likely to find that there are LOTS of other tales to be told. He has a giant sense of entitlement and his personal power that "taking a few liberties" would HARDLY be unexpected -- this is BOistan after all, the land of "no controlling moral authority".


Are we really going to sit here and let the whole BOistani system of "Power is all that counts, corruption is king, and if it feels good, DO IT" be called into question? The MPR callers were certainly not -- they want their "icon" back! BOistan is supposed to be the land of ZERO morals, what is going on? (for THEIR side stupid, the conservative side is supposed to be concerned with 38 year old "charges")

"Sexual Harassment" is such a broad term that it includes what Clarence Thomas was ACCUSED  of (mentioning an x rated movie and suggesting that there might be a pubic hair on a can of Coke), after which Anita Hill followed him to two different jobs. It also includes charges of rape and attempted rape against Bill Clinton and Harvey Weinstein, as well as LONG lists of grabbing, exposing themselves, masturbating, etc, etc. Justice Thomas will never be forgiven for his ALLEGED words, while Slick is still an "icon" to many today, and if Hillary had been elected, would be functioning as "First Man" with no outcry from the MSM. (clearly, no Trump, no lefty puritanical purge!)

My contention is that "Sexual Harassment" was purposely created to be a weapon for women, with the assumption being that "liberal men" would largely be exempt, and it would be a way to take "sexually repressed, nasty conservative hypocrites" out of public life.  The law on Sexual Harassment is that "if she feels she was harassed, she was harassed"! Words, pictures, attitudes, staring too long, etc, etc are ALL part of Sexual Harassment! It might better be called "Sexual Correctness" (SC), since it's enforcement is done very much like "Political Correctness". I cover some more detail here if you have interest.

Take "Pocahontas" in the PC case ...  the word could denote a  wonderful Disney character, or if used by Trump it could be a "racial slur" -- it is all up to what "The Party" (TP-D) and it's wholly owned media say! What sexual behavior is and is not problematic is up to the same powers. (it's POWER baby!) The busty young lass with the low cut top bends over to pick something up, and the male is caught looking, that can EASILY be "SC"! She can wear whatever she wants, he is not allowed to look if it makes her OR some other woman "feel uncomfortable".

Since the early '90s, the SC genie worked pretty much as intended -- when it showed it's face relative to a lefty politician, it was quickly ordered back in the bottle by the MSM and "feminist" women. When it attacked a conservative -- no matter how mild (or ancient) the "charges" as in the case of Clarence Thomas, it was a fearsome genie indeed, destroying many men's careers and political aspirations. (men on the WRONG (right) side!)

In an adult and civil society,  women would be well able to deliver a knee to the scrotum, a scratch to the face, a nice scream, or other "scene stealer", and go off to the supervisor, a large male friend, or something similar, and the cad would be put in his place. Slick Willie would have had his famous index finger broken so many times it would  crookedly point back at his oft beaten pulpy face in an adult world.

Alas, we live in a feminized society of back room gossip and palace intrigue in the media as well as the halls of government and business. Both manly and womanly honor and virtue are dead, replaced by sneaky, snide, slimy interactions and "cat-fight hissy fits" of the sort that Obama excelled at. The "end of life" for once great cultures is always thus -- Athens, Rome, Britannia ... all ended with deep corruption of all types ... sexual just being one example.

In a world of even minimal honor and virtue, "Sexual Harassment" would leave a "mark" -- the perpetrator bent double, nursing an embarrassing scratch on the face, a black eye, etc. It would be "out" in an instant, because the woman would find her personal honor and reputation to be worth far more than some "career" ... and indeed, the sorts of women that moved up the ladder in that world would be those that were known to be more than capable of standing up for themselves in any situation, as well as likely having male friends that any "masher" would seek to avoid a visit from at all costs.

I continue to detest the world that has been created by the gutless, godless, double talking politically correct vermin that generally hold power in this kindergarten swamp society. Apparently they are often "mean to women", and the women largely take it and stew in their juices for years, thus creating more such incidents for their sisters. One can't feel awfully sorry for them however, since Teddy Kennedy set the standard by killing his secretary and getting off scot free in '69, and then Slick Willie cemented the standard in '99 -- we are left with an amoral feminized society where the slimy tend to prevail. Nearly half the female population has been willing to trade their "virtue" to protect the right to sacrifice their children to the Moloch of "convenience" in abortion.

There seem to be two prospects here as to what's going on?, of the kind that allow a mixture of both:

"Topping the list, of course, is Bill Kling, the president and CEO of the entity officially known as Minnesota Public Radio-American Public Media. He made $373,254 in compensation and benefits from MPR/APM, which for the year grossed $82.2 million. Kling's total take swelled to $606,753, including approximately $180,000 from American Public Media Group (APMG), which controls MPR, and $48,000 from Greenspring, MPR's for-profit arm."


"Non-profit" doesn't mean that certain people like Garrison and Kling don't make LOTS of money ... "officially", Kling took $48K from the "for profit arm" Greenspring. "Follow the money" is often a great piece of advice ... I expect part of the reason for the very quick and very clean separation is that the tax money soaking NPR and MPR (we send money to MPR as part of a CONSTITUTIONAL AMENDMENT here in the land of Loons) ... my guess is that someone looking closer at "Pretty Good Goods" and such might find some interesting finances.

I started out on #1, but am shifting toward  #2 ... it certainly isn't that Matt Lauer and Charlie Wrangle were not well known abusers.Here is Katie on Matt in 2012 on air ...

Here is Cokie Roberts letting us know that women DC reporters for YEARS knew not to get in an elevator with Charlie ...


What sort of people / organization installs a remote door lock in an office so Lauer can lock victims in? Would you listen to "news" from such an organization?

"Situational Morals" are NOT morals! For ALL unrepentant humans, the ONLY sort of "standards" are DOUBLE STANDARDS!  **ONLY*** by recognition that we are ALL filthy sinners in need of REGULAR repentance and participation in Holy Communion, can we even hope to do better.

Up until the '60's, America was largely a Christian Nation. In a Christian Nation, real standards matter! There was even an expectation that leadership needed to be held to a "higher standard". Starting in the '60s, we seriously abandoned God. Pick your poison ... Chappaquiddick, Watergate, Roe V Wade, "Borking", the Clarence Thomas lynching, Slick Willie, gay "marriage", 58 genders ... your list may well be different from mine, but America gave way to BOistan ... and thus Trump (well covered here).

Political Correctness (PC), Sexual Correctness(SC) are all symptoms of our migration to the sick tribal backwater of BOistan. Trump has barely dented the swamp, but he HAS begun ... some of the measures he is taking are hitting them very hard! Will the current tempest raise public outrage that our own "swamp congress" has spent $17 million of our money to protect themselves, when the protection is SUPPOSED to be that we get a chance to vote them out every two years???? I suppose that largely depends on the media -- we live in a nation where individuals don't dare feel "outrage" unless their favorite media outlet tells them it is OK.

Can we continue to live in a nation where any woman can "feel harassed" and make accusations decades after the fact and be taken seriously? I'll close with this from Power Line ...

Men lie. Women lie. Children lie like rugs. Rose McGowan I believe. Ms. Tweeden I believe, even without the grotesque photographic evidence. But I have grave doubts about some of the #MeTooers. Mark my words: Turning America into a perpetual Salem Witch Hunt where any man can be destroyed just by accusations of incidents that allegedly happened 40 years earlier and can never be disproved will not end well. Ask not for whom the 10, 20, 30-year-old sexual assault accusation tolls, my brothers; it tolls for thee.