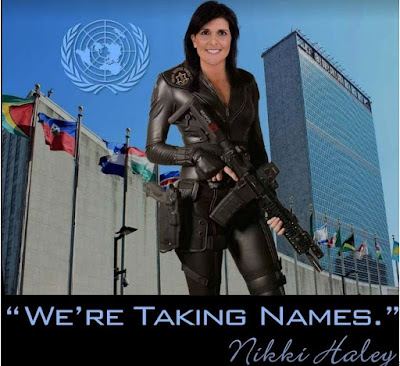 We are a LONG way away from 2024, so I know this is total rank speculation.

Having ended 2017 with "The Stupid Party" (TSP-R) barely getting it's sorry act together enough to pass a decent tax bill that included the removal of the individual mandate, along with a booming economy and stock market, one starts to imagine that the Trump Restoration has real potential.

Certainly, being a realist, there is still the Administrative/Deep State plus the entire media, educational, legal complex arrayed against Trump, with only TSP to provide a Keystone Cop political defense. Someone REALLY needs to give them lessons in how to FIGHT! However, as Scott Adams has covered relentlessly, one master communicator with a Twitter account seems to be more than equal to the arrayed forces of TP (The Party-D).

Nikki strikes me as one of the front runners for a future run. Imagine TP pointing out that NOBODY ought to vote for her "just because she is a woman", where the only reason that anyone would vote against Hildebeast was "misogyny", the most important word of 2016!

Pretty much all TP speech is really just about political gain.