Bill Clinton: Americans Must Decide Who We Really Are - The New York Times:

In case anyone had any illusions that "The Party" (TP-D) had somehow had some sort of a moral turnaround relative to the treatment of women, the NY Times putting up a column by Mr "all female employees must wear kneepads",  lets us know that the short lived "morality kerfluffel" was merely a cynical political ploy to steal a Senate seat (a successful ploy) due to the "Stupid Party" (SP-R).

We always need to remember how Slick Willie stained the oval office and provided a major push in our descent into BOistan.

**IF** anyone on the left ACTUALLY cared about "women's rights", Slick would be LONG past having any sort of political stature, and so would have Hillary. As we know, they absolutely DON'T CARE, and even more so they assume that people in this God forsaken tribal backwater of N America that used to be a great nation have no intelligence and no memory.

When trust vanishes and knowledge is devalued as an establishment defense of the status quo, anything can happen. We already see citizens being disenfranchised by the millions, targeted by race, ethnicity and age not because they are ineligible to vote, but because they favor inclusive, not tribal, nationalism.

Slick and "trust" have got to be one of the greatest oxymorons ever. "Knowledge is devalued" -- you mean like not being able to figure out what "is" means? "Anything" already DID happen -- 8 years of BO that wiped out the last vestiges of the Separation of Powers, Rule of Law (Constituition), and most of all the direct use of the Administrative State (IRS, EPA, FBI, CIA, etc) for political gain was what happened.

"Disenfranchised" ... Dog Whistle for "show an ID". Certainly everyone needs an ID to survive in their day to day life, HOWEVER, TP demands that ALL be able to vote, vote early, often, and with complete ease ... including non-citizens, felons, the dead, etc


Who wins in this kind of environment? Those who already have it made; they’ll make more. The least responsible members of the political media, who will prosper covering each new controversy and outrage. And the enemies of democracy, who feed the discord and hope that Americans will finally concede that informed self-government no longer works — and perhaps is no longer even possible — in the modern world.

How hard would a sane person not to laugh at someone who entered and left the presidency close to penniless, and is now worth N of $100 million, much of it VERY hard to track in off-short trusts and foundations, talking about "those who have it made"? See chutspah!

I'm not sure that who he thinks is going to prosper in media really is going to -- CNN, the bastion of Fake News mentioned a fake "white truck story" 23 times, while ignoring the BO administration spiking a Hezbollah investigation. Does anyone care about CNN other than fodder for jokes anymore?

Obviously the NY Times cynically believes that even in the middle of a fake politically motivated "moral outrage campaign", putting up a column by the hick that walked the halls of power with his pants around his knees is just fine. Slick may be right about "the modern world" -- largely it has been "post truth" for a very long time. Gunga Dan and the "fake but true" (according to him) story about how bad a fighter pilot W supposedly was is still my standard for fake news.

At least the "birther" question was a real question -- you supposedly DO need to be a US citizen to be president. OTOH, there actually isn't a Constitutional test for "how good a fighter pilot you were 30 years ago". Hell, believe it or not, we have actually had presidents that could not fly a jet fighter at all, and they seemed to do OK!

What DOES utterly amaze me is that even after the Blue Dress, lots of flights on "The Lolita Express", and the political disaster of 2016 for TP, the NY Times still cares, and thinks OTHERS will care what leaks out of Slick's pen. The people that he and Hildebeast have MOST played for wealth and power are papers like the WaPo and Times, plus a TON of TP rubes that just LOVE the Clintons!

I more and more suspect that a huge majority of the left really DOES love leadership like Stalin, Mao, Pol Pot, Castro and the Clintons. "Hurt us AGAIN!!!! .... PLEASE!!!! ... we are nothing but sheep who love to be abused by you, ESPECIALLY when we KNOW that you will just abuse us again!"

Sane people would believe that there was no chance of Hillary in 2020, but mistaking many on the left for sane is an old problem. 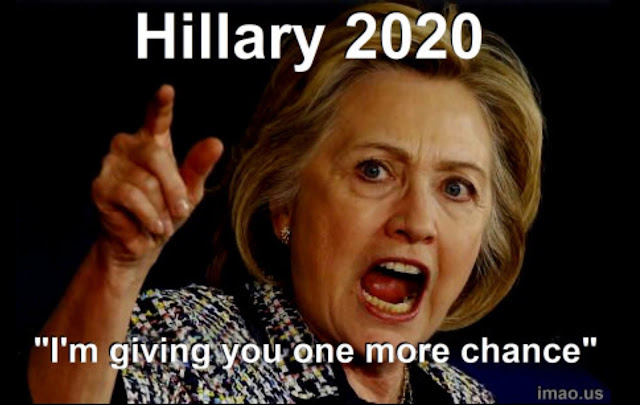