Naturally, liberals are apocolyptic over the tax bill ... anything that has even a TINY chance to allow people to keep more of their own money is "the end of the world" to liberals. This Forbes article claims that the bill is "The End of Economic Sanity in DC"  ... assuring us that there HAS been "economic sanity in DC" in the past and "this time it's different" ... ho hum.

A tax form that says "list your income" with a command to "send it in" (for people that make "more" than a given liberal of course!) is the only tax plan they MIGHT find "fair" ... until they start taxing "wealth" while you are still alive at least.

I happen to be reading "The Age of Reagan" right now and as luck would have it, just read past the quotes in the attached column -- they say history doesn't repeat itself, but only "rhymes". This one seems closer to a repeat to me! The following is a good quote from the linked, and the linked is well worthy of reading.

Liberal rhetoric on the issue is revealing. Allowing people to keep more of their own money was called “showering money on the rich,” as though all wealth belonged to the government rather than the people. If not outright egalitarianism, the Democratic attitude is at least rooted in a distributionist fallacy—the idea that wealth is distributed, mostly by government, rather than earned by individuals and apportioned by markets ...

I'm not going to do a ton of work and link everything, but these figures are mostly from my usual sources -- CBO, Wikipedia, etc.

Over his term, Obama added $10 T to the debt, W added $5 T , and the rest of US history (pre-BOistan) added $5T in over 200 years. If Trump adds less than $20 T on his own, he will be doing "better" by recent standards in which each succeeding president doubles the debt!

As the media and your lefty friends go nuts over the "massive increase in debt", just remember the BO cliff! All that is being discussed here are the question of the pitch of that far right of the chart based on TWO elements of which GDP growth is actually the major one. CBO policy counts all tax changes as economically neutral -- tax increases never decrease GDP, tax cuts never increase it ... even though both typically happen, in order to stay being called "non-partisan", the CBO just leaves the contentious issue off the table in it's calculations.

Why did the BO cliff happen? He attempted to "stimulate" the economy via massive government directed SPENDING, so GDP growth was terrible and and the money largely went to big democrat supporters as a reward for being democrats, vs where it might actually increase growth.

All the howling about the current tax bill is about twiddling the upward slope of the chart below -- the CLIFF is about Democrats actually being in charge. 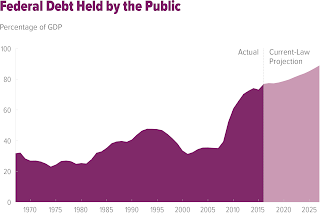 People that pay attention know we have been to this movie before, with Reagan in '81. Slick Willie didn't get to wreck the economy ... the Republicans took over the House for the first time in 50 years in '94, and paid the price of controlling the RATE OF GROWTH in government spending, while Slick took the credit for a short budget surplus. In terms of how media works here, that is pretty much a "fair deal'.

The REAL test is if the Republicans and Trump are willing to take the hard measures of reducing that rate of growth in spending again ... they do NOT have to make actual "cuts", only reduce the rate of growth, and that chart will trend down again (slowly) as it did in the late '90s providing that the tax cuts have the desired effect of increasing GDP growth!

This is all pretty easy to understand, one would think that a few more people would consider understanding it.