While this book is written to "couples", it will be of nearly equal value to almost anyone that has conflicts in relationships. In today's world, that has to come very close to 100% of us, with the conflicts generally being more nasty and longer lived.

Since the 1960's we have consistently pushed for each of our views, values, wishes, visions, desires, etc to be of ultimate importance, while the old shared values of "God, Country, Family, Church, Community" are now of much less to often even no importance at all to many.

So there are less shared values, more conflict, and one of the ways that many hope to deal with it is to "ignore it and it will go away' ... I find this paragraph from page to 11 to be as true, direct, and scary as pretty much anything I've read in books of this type:

" Unlike the other patterns, in the engage-distance pattern, there is an imbalence between the partners: one moves one way, the other goes in a different direction. That is one person wants to discuss or pursue a topic and be together, but the other person, at least in that moment, does not want to discuss a topic further, or perhaps not even be together, and instead seeks some alone time. What makes this pattern particularly tricky si that the engager or distancer can start out doing so in either an effective or a constructive way or a more destructive, aversive, or avoidant way, but reguardless, the pattern ends up being a disaster."

Typically, the "avoider" is conflict averse and  REALLY wants it to "just all blow over", or "maybe things will get better on their own" -- they don't. What it leads to is anger in the relationship ... sooner and later. Anger is a valid emotion -- we all have it. The problem with it in relationships is discussed on page 25  " ... there is a very corrosive aspect to anger in close relationships that often overshadows any possible benefits".

"...feeling angry means having increased negative emotional arousal; this in turn churns out judgements. Judgements then increase arousal, which produces more judgements, which leads to inaccurate and ineffective expression of emotion and desires, which then results in misunderstanding and conflict and rarely leads to effective changes. Thus, angry feelings and angry expressions in close relationships almost always create distance, and distance is the enemy of closeness and intimacy ..."

Page 46 has even worse news:


"In addition, being together passively can be risky: partners may begin to focus a lot of negative attention on each other inside their own heads, running a list of negative past deeds or anticipated future deeds through their minds, privately judging or criticizing the other,  becoming upset and eventually going on "red alert" waiting for the other to do something and then snapping at him or her ..."


So what are we to do? The big picture  in the book is "DBT" ... of which I have a website here with lots of videos and charts if you are interested.

What is important is for both people in any relationship -- "intimate", or other, to follow the principles of DBT as they discuss issues they have -- hopefully as quickly as possible. More "simmering" just tends to insure that everyone gets at least "scorched", if not fully burned.

DBT is like excercise for your mind and emotions. We ALL have BOTH "Emotional Mind" and "Rational Mind" -- if we practice and observe, we get the gift of "Wise Mind". Modern people tend to spend a lot of time trying to talk reason to people in Emotion Mind (totally useless). Here is a link to these pictures.

"Why we can't communicate" is because we are speaking different languages. For those of us raised in an era where there were more assumptions that emotions are often invalid, and EVERYTHING can be solved by reason, we can be "very good" (in a scientific lawyerly sense) of "making the case" why the emotional position "loses" -- and usually the relationship is what REALLY loses! 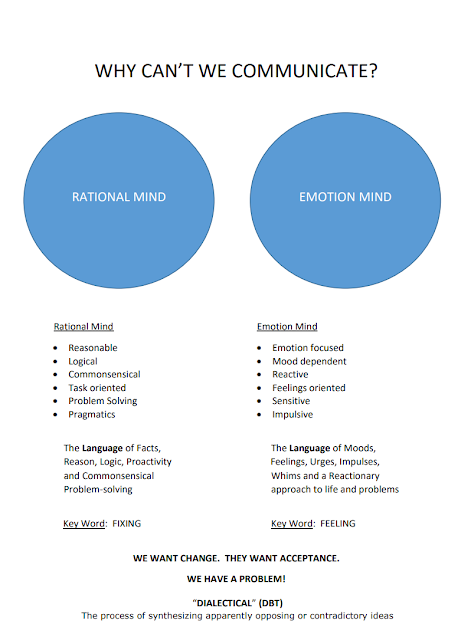 Wise mind is a solution to getting on the same page -- at least one party has to "give" and be willing to take the risk of reaching out, AND often accepting some INvalidation, anger, judgement, etc without "giving as good as you get" ... and thus break the cycle and insert hope. 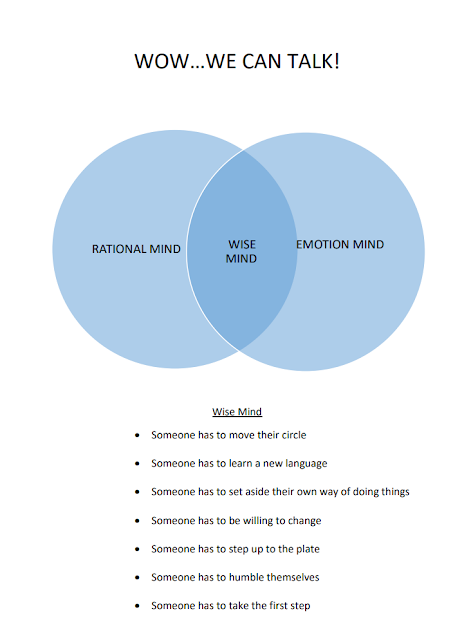 Wise Mind demands being unhurried, being respectful and non-judgemental. It demands Acceptance -- even of things that we really don't like.  We do not have to LIKE or "agree with" things  to accept them ... we can be a parapalegic for life, radically accept it, and not "like" it! Our son can join a cult that worships space aliens, and we can accept it ... and even validate it "I understand how you find the group you joined to be supportive" without AGREEING with him.

Many in our society even encourage denying acceptance of reality in order to not "normalize" some facet of reality. I really like this video of Marsha Linehan, the creator of DBT on that topic ...


I believe that the book is of "use" without the PRACTICE of DBT, however it is going to be FAR more powerful with a daily practice of at least Mindfulness and Radical Acceptance (Interpersonal Effectiveness and Emotional Regulation are good as well).

Everyone that reads this blog knows that I believe that Christ is what we really need to restore our broken world full of increasingly broken, addicted,  and too often, suicidal people, often at each others throats. For those that are not going to go there, DBT can help -- you may not learn to love your neighbor, or even your spouse, however you are much more likely to be able to tolerate them -- and even yourself.

Needless to say, I HIGHLY recommend the book, and or course DBT -- I've become somewhat of a zealot on that topic. I'll leave you with this last video -- there are many more out on the DBT Site link above.