The article does a great job of explaining what anyone with a moderate level of memory remembers about 2012...


What, exactly, would Obama be doing? According to The Guardian, Obama’s new database would be gathered by asking individual volunteers to log into Obama’s reelection site using their Facebook credentials. “Consciously or otherwise,” The Guardian states, “the individual volunteer will be injecting all the information they store publicly on their Facebook page — home location, date of birth, interests and, crucially, network of friends — directly into the central Obama database.”

Naturally, that was "genius, innovative, etc".


Facebook had no problem with such activity then. They do now. There’s a reason for that. The former Obama director of integration and media analytics stated that, during the 2012 campaign, Facebook allowed the Obama team to “suck out the whole social graph”; Facebook “was surprised we were able to suck out the whole social graph, but they didn’t stop us once they realized that was what we were doing.” She added, “They came to [the] office in the days following election recruiting & were very candid that they allowed us to do things they wouldn’t have allowed someone else to do because they were on our side.”

Is there even one of us that doesn't TOTALLY understand this? What is good for "our side" is GREAT, what is good for "the other side" is TERRIBLE! Human nature, as natural as breathing -- what CULTURE was once to do was modify human nature to allow that culture to survive and flourish above tribalism, the natural state of man. To understand that "the rules" were there for ALL ... not just "our tribe". 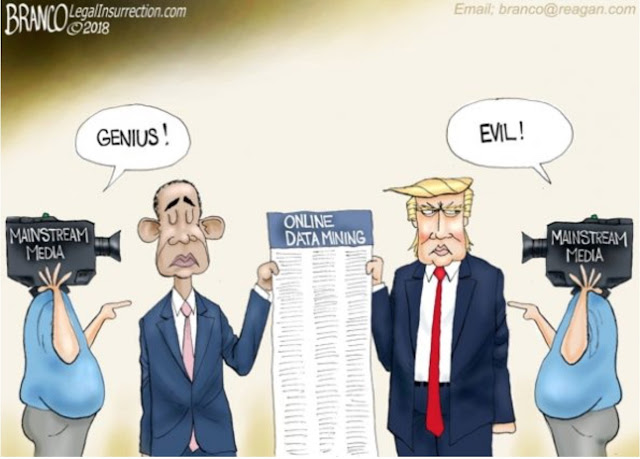 "The Hill" is a slightly left of center media bias rating ... apparently, for a mostly center media outlet, the contrast was just too recent and too glaring to not notice and they gave at least some lip service with the article.

These sorts of dichotomies are nearly daily issue on NPR. Trump had the audacity to congratulate Putin on his victory! Horrors. Naturally Obama congratulated Putin on his victory in 2012 and it was not a problem. That is what it means to be tribal -- when your tribe does it, it is fine, when the other side does it, it is a crime. Oh, and memory is the first thing to go.

At this point, I believe something over 70% of the population understands that we are politically tribal today  -- however my contention is that something like 90% of those people believe that "their tribe is right" (meaning correct).  They are wrong ... and any that still believe we have not fallen to tribalism are also wrong.

I voted for Trump because he was the most non-party / non-tribal candidate possible to win in 2016   -- however he is FAR from non-tribal enough to get us out of the mess we are in. And naturally, a new tribe of rabid supporters has formed around him.


I'm a God/meaning loyalist -- the budget "deal" was terrible. The "Stormy Affair" isn't as bad as a boss having sex with an employee at the office (especially the Oval Office), but it is also just one more sign that we are in Sodom and Gomorrah territory -- but we have known that since Chappaquiddick. 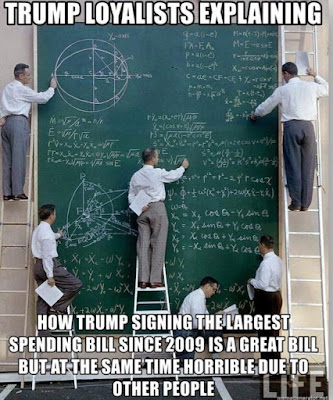 The choices are actually very simple. We will either return to a point where "70-80%" of people in this territory agree on a set of values that transcend tribe / party, and thus have something like what America was, OR, one of the current, or some other tribal view will "win", and exterminate, re-educate, etc the "losers" as happened in the USSR, National Socialist Germany, Mao's China, Vietnam,  etc and those of the "victorius" tribe will live on in something like "The Lives of Others".

Naturally, none of the tribes study history, so they are absolutely certain that if THEY win, they will do it "right" this time!